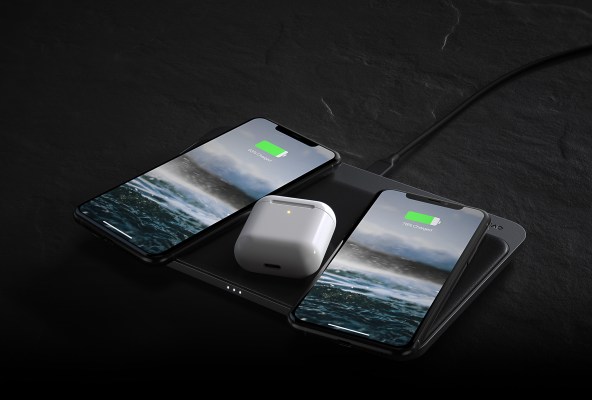 Accessory maker Nomad already offers a couple of excellent wireless chargers that work great with Apple and other Qi-compatible devices, but they’re introducing a new one that could be their most versatile yet. Using technology provided by partner Aira called ‘FreePower,’ the new Nomad Base Station Pro will be able to charge up to three devices at once placed in any orientation on its surface – cool both because of the three device simultaneous support, and the fact that you don’t have to make sure the gadget you’re charging is lined up exactly right on the charger, as is typically the case.

This is pretty similar to what Apple’s AirPower promised, before its unfortunate demise. The hardware similarly makes use of a matrix of multiple charging coils, which interlink to offer charging capabilities across the surface of the Base Station Pro. Perhaps intentionally, Aira’s website URL is ‘airapower.com,’ one letter off from Apple’s shelved first-party accessory.

Nomad’s charger inherits the same aesthetics of the company’s existing chargers, which means you get a black soft leather surface for putting your devices on top of, and the surrounding frame is made of slate gray aluminum. The charger should look and feel very premium, if Nomad’s other Base Stations are any indication.

The Base Station Pro supports charging speeds of up to 5W each, which is not the max supported by the iPhone or other devices, but which will still work just fine for a top up or for overnight. And since it supports up to three devices at that speed, you could use it to charge say, two iPhones and AirPods with Apple’s wireless charging case all at once.

Nomad also includes a 27W USB-C charger with Power Delivery in the box with the Base Station Pro, and a USB-C cable to connect to the charger. This probably will be a fairly premium priced piece of hardware, but we’ll find out for sure when pre-ordes begin in November.

The one significant way this differs from what Apple was building, at least for Apple fans, is that it doesn’t provide charging for the Apple Watch. Nomad has a Base Station model that offers an integrated Apple Watch charger, but of course with that you’re not getting the ‘place anywhere’ overlapping coil design built for this new model.

U.S. Space Force chief: The use of space technology in Ukraine ‘is what we can expect in the future’
Angela Bassett Recalls How A 12-Year-Old Keke Palmer Actually Got Her The Role As Her Mother In Akeelah And The Bee
Popcaan Shares Video for New Song “Next to Me”: Watch
After Emancipation Screened For A Star-Studded Audience (Including Dave Chappelle), Will Smith Had A Funny Take
‘The Callisto Protocol’ Receiving First Post-game Content This February