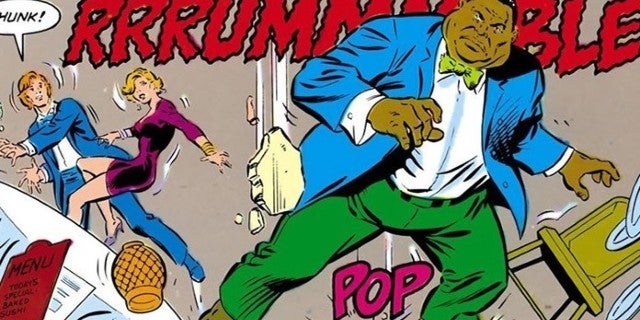 Season 6 of The Flash kicked off on Tuesday night and while The CW series in a very real way kicks off the Arrowverse’s march towards “Crisis on Infinite Earths” this season, the impending mega event is only one part of story. In the premiere, “Into the Void”, Barry Allen and the rest of Team Flash found themselves dealing with the sudden and seemingly random appearance of black holes around Central City. The origin of the black holes was a surprise for Team Flash, but for fans of DC Comics, the reveal may be a fresh take on a familiar character: Chester P. Runk.

Spoilers for the Season 6 premiere of The Flash, “Into the Void”, below.

In the premiere, black holes start appearing in Central City, first at the trash processing center, then at Jitters. Neither black hole is especially large, but they do threaten life and do damage. In investigating the black holes, looking for answers as to where they’re coming from and how to stop them, Iris discovers that a young man named Chester Runk was building a device on his Twitch-like stream, but when he turned it on, he created a small black hole. In the video, he tries to touch it and the team soon finds out that it’s left him in a catatonic state, though he is physically fine.

Iris soon puts the pieces together. Chester is creating the black holes appearing across the city and Caitlin takes that information a bit further. Chester is the black hole, his consciousness having become part of the phenomenon. It leads to a tense discussion of how to resolve the situation before Chester unleashes a black hole that could endanger the whole city — Cisco has a device that can stop the black holes but would kill Chester. Barry wants him to find another way. Fortunately, they find that other way in the nick of time, with Barry racing into the black hole to retrieve Chester’s mind and restore it to him.

It’s a fresh take on not only the standard “villain of the week” formula that we often see on The Flash, but on the character himself. In comics, Chester P. Runk was an overweight man with some psychological problems who ended up developing a matter transmitting machine. When he experimented with it, it ended up imploding and turned him into a human black hole. To prevent himself from imploding into a strange universe on the other side of the black hole, he had to feed himself 47 times his own mass. In comics, Chester also has a bit of a villainous start. He initially sends people who annoy him into the strange universe and also ends up raiding art galleries, jewelry stores and other places for the dense materials he needed to consume. The Flash eventually catches up to him and also ends up showing him a productive use for his interesting condition — he can make unwanted things, like garbage, disappear. Chester eventually ends up a wealthy businessman who becomes an occasional ally to Wally West’s Flash.

While The Flash doesn’t present Chester with a villainous start, the series does set up Chester for potentially being a future ally for the team as well as potentially set up a major piece of technology for the Arrowverse. In order to help Chester get himself back together — his cells have to resettle themselves on the subatomic level — the team put him in their new M.A.C. or Mental Augmentation Chamber. The chamber was meant to allow Barry to boost his cognitive abilities by tapping into the Speed Force and seeing every possible outcome of a scenario at the same time. Instead, the team uses it to contain synaptic energy, which allows Chester to literally get himself back together again. It’s a bit of a different use, one that could end up evolving, something that will be interesting to see play out on The Flash.

The Flash airs Tuesdays at 8/7c on The CW.

What did you think about The Flash‘s take on Chester P. Runk? Do you think the M.A.C. could end up being something more? Let us know in the comments below.