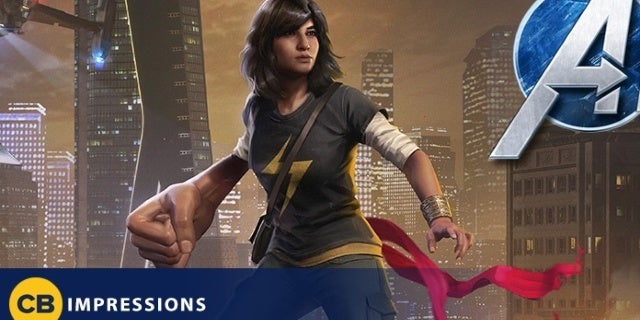 Square Enix and Crystal Dynamics had a few reveals to make at New York Comic Con this year regarding their much anticipated Marvel’s Avengers game, and that included a brand new playable character. It was eventually revealed to be none other than Ms. Marvel herself, Kamala Khan, and not only will she be playing a big role in the game’s story, but she will also be a force to be reckoned with on the battlefield. ComicBook.com had the chance to get some playtime with Ms. Marvel, and she’s just as fun to play as you might expect. Here is the full rundown of our experience with Ms. Marvel and why you should be hyped for her addition to the game.

Specifically, we had the opportunity to play Kamala in the training program portion of the game which continually spawns waves of enemies for Kamala to battle. It allowed us to get a good sense of how she controls, and her unique polymorph power set allows players a tremendous amount of options in combat. Thanks to her power set you can stay stationary and hit opponents both up close and from range and the style in which you do so will make any Kamala fan smile.

Simple combos do a decent amount of damage, but it’s the handy pushback that you get from those attacks that help even more, giving Kamala room to breathe and the option to get out of harm’s way. Sure you can do that with a roll or a dodge, but you can also latch onto a ledge from afar and pull yourself towards it with Ms. Marvel’s stretchable arms much like you would a grappling hook. That was one of the biggest things I noticed during my time with her actually, as her skillset makes it rather easy to get out of dodge when overwhelmed by enemies, and that is only aided by one of her Heroics, which adds yet another invaluable support tool to her arsenal.

Ms. Marvel has several Heroics, but the first one is a healing ability that rejuvenates you with a considerable amount of health. All of these can be upgraded as you level up of course, but even early on the ability is immensely useful, though it does take a bit to recharge. Her second ability has Kamala charge up and embiggen her hand, using it as a battering ram that will smash an enemy into the surface behind them. It’s a visually impressive move, and if it doesn’t outright take them down it will at least hit them for a ton of health and knock them backward, so either way it’s extremely handy.

The last Heroic is even more impressive though, as Ms. Marvel uses her abilities to grow to substantial size and tower over her opponents. Guiding a giant Ms. Marvel around the battlefield is ridiculously fun, and you feel exactly like the powerhouse you would expect. Your attacks do greater damage and it feels like swatting flies, though you do need to be mindful of when this ability runs out, as you don’t necessarily want to be in the middle of a group of enemies when this effect fades.

Granted, she doesn’t need just Heroics to shine. Some of her normal combos and abilities are just as useful, like when you do a jumping kick and her leg extends as her foot grows and swoops up, knocking an enemy back. That became a go-to move during our time with the game, one because it just looks cool and two because it’s a great way to launch an enemy into the air, leaving them vulnerable to juggle attacks. Some of her attacks hit a little slower than you might expect, but that’s because they also pack more punch, but her speed, overall agility, and resourceful counter moves help even that sacrifice out.

Crystal Dynamics also nailed the presentation, as Kamala’s costume looks just like the comics but perhaps more importantly she sounds and feels like the character we’ve come to love and appreciate. Her quips and asides are perfect in tone and delivery, and it all comes together in stellar fashion, creating an authentic and immensely fun Ms. Marvel experience.

Now, there are some things that need a little tweaking of course. The timing on Kamala’s dodge (and dodges in general) needs a little more fine-tuning, and the flow of combat could also use a touch up here and there. That said, those are nitpicks of an otherwise delightful playthrough with Ms. Marvel, and we’re pretty sure any Kamala fan is going to have a ball of time.

Marvel’s Avengers hits stores on May 15, 2020, and you can find more of our coverage right here! You can also feel free to hit me up on Twitter @MattAguilarCB for all things Avengers!