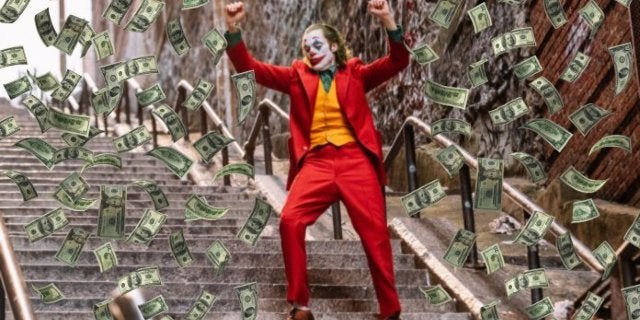 Joker‘s box office dominance continues, as the DC film breaks yet another record – this time for best Monday earnings ever for a movie in October. Joker earned $9.72M, besting Sony’s Venom, which held the previous record of $9.63M. The film also broke the September Monday box office record held by It, another Warner Bros. (New Line) production. Within the DC franchise, Joker – a standalone villain origin story made on a modest budget – is well ahead of Justice League‘s Monday earnings of $7.5M. It’s the biggest DC movie opening of all time in nine markets overseas, with the best Thursday preview night of all time in October.

Joker‘s opening weekend run to a cumulative $105.9M domestically, and $248.2M worldwide. As Deadline notes in its report, Joker also carries the noted distinction of raking in all that money with an R-rating on a non-holiday weekend, whereas Venom used leaned on its PG-13 rating and school closures around the Columbus Holiday weekend to propel itself to a box office record. As a fair caveat: Joker is also the widest release ever, with 4,374 theaters, compared to Venom‘s 4,350.

The upcoming sophomore weekend for Joker will be interesting. The film will lose some limelight as the marketplace widens out to offer moviegoers a lot more variety. Families will be out to see The Addams Family animated film; while action fans will be lured to Will Smith’s Gemini Man special effects event film; and couples and/or college crowds could be pulled into the Siri satire comedy, Jexi. For Joker, week two will likely come down to those who are interested in the critical and audience praise of the film; the social discourse around it; and of course, those who were too concerned about what could happen in the charged time of opening weekend, to actually show up at the theater. It’s anyone’s guess how many people will want to go out and experience the dark ride of Joker a second time.

What the cumulative profit is from that crowd, is hard to predict, but if the days of the week keep bringing in record numbers like Monday did, it’s not at all hard to see Joker cruising to an easy second-weekend win.