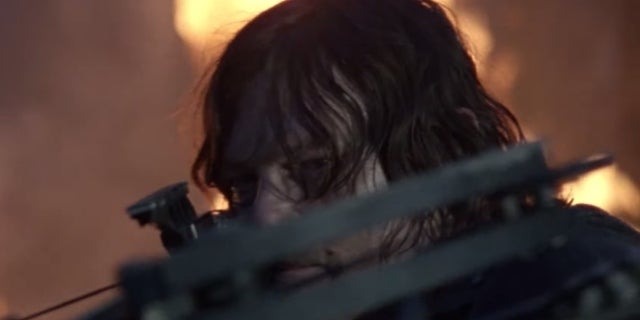 AMC has published the talked about scene from The Walking Dead Season 10 premiere, “Lines We Cross.”

When a Russian satellite crash lands on Earth, it ignites a forest blaze that threatens the nearby communities. Michonne (Danai Gurira), Daryl (Norman Reedus) and survivors from across the allied communities are then forced to trek into enemy territory and combat the fire, despite warnings to stay out of land claimed by Alpha (Samantha Morton) and the Whisperers.

“It actually, weirdly, started with conversations about ships and ghost ships, and like these ideas of things that are drifting around on the ocean,” Kang told ComicBook.com when asked to explain why the newest season of TWD starts in space. “We were trying to think of, ‘What are things that happen over time in an apocalypse that we haven’t explored on the show yet?’ And so somebody brought up this idea of like, ‘Well satellites, like if they’re not maintained, they degrade and eventually fall out of orbit.’ It even happens in our world now, but it’s not as common because they’re being maintained.”

The satellite, which still has a role to play moving forward, ties in with the season’s paranoid, Cold War-like conflict with the survivors and the Whisperers, two sides separated by borders.

“Thematically, we wanted to kind of talk about a war that felt like it had Cold War aspects and the Whisperers like always watching our people, and so a satellite felt like a good metaphor for that,” Kang said. “But we also just thought that that was a fun and, hopefully, a strange and exciting way to start the season and, you know, the satellite has other implications for the season going forward as well.”

That forest fire is just one of many new environmental threats to come in Season 10, out to top the snowy Season 9 finale that pit the survivors against a ferocious blizzard — a first for the show.

“One of the things that we have going on this season is, we’re continuing some explorations of natural elements and how they play into our world,” Kang previously told EW. “And fire is one of those elements that comes into play in a few key ways that twist the story in a way that will be pretty exciting.”

Fire is terrifying enough in the real world, Kang added, but it poses an additional challenge for survivors living in a medieval-like environment.

“We sort of take for granted that we have people that can deal with it. It obviously has very different implications for our people in an apocalyptic world,” she said. “I don’t want to give too much away about this particular story because hopefully there’s some unexpected aspects to it. But we will definitely see our people trying to contend with things that they can’t handle in the same ways that we do in our world now.”

New episodes of The Walking Dead Season 10 premiere Sundays at 9/8c on AMC. For more TWD intel, follow the author @CameronBonomolo on Twitter.

Why Book Blogs Still Matter In an Age of BookTok
Best PS5 Family-Friendly Games (2022) to Play This Thanksgiving
Praise be, landmark improvements are coming to Age Of Empires 4
Jennifer Lopez Announces First New Album in Nine Years, This Is Me… Now
Jennifer Grey Shares New Details About Dirty Dancing Sequel And ‘Original’ Characters Like Baby Returning