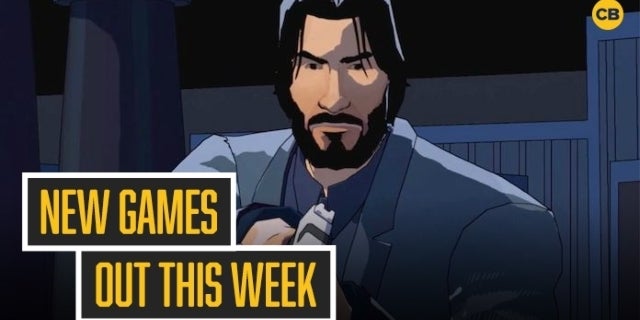 The first week of October is down, and now things are going to start coming hot and fast. This week — beyond a new release from Sony Interactive Entertainment — there’s not many marquee releases, but what there is are a ton of promising smaller games hitting PS4, Xbox One, PC, and Nintendo Switch. From graffiti simulators to racing games to titles that star John Wick, this week should provide a little somethin’ for everybody. And on top of this, there’s a few notable ports dropping this week as well.

That said, here are the noteworthy releases coming this week that are worth, at the very least, taking a quick gander at. As always, it’s important to remember that this isn’t an exhaustive list of releases. Nobody has time for that. Rather, this is a curated list that features the most salient new releases and noteable ports. Further, while expansion, remasters, and remakes are included, games releasing into Early Access are not.

Pitch: “Concrete Genie follows the heartwarming journey of a bullied teen named Ash, who escapes his troubles by bringing his colorful imagination to life in his sketchbook, while exploring his hometown of Denska – a once bright and bustling seaside town now polluted by Darkness. Ash discovers a mysterious lighthouse, where he finds a magical energy that charges his paintbrush with ‘Living Paint’ capable of creating magnificent masterpieces that can purify Denska’s polluted walls. Ash must harness the magical properties of his powerful paintbrush to eliminate the Darkness polluting Denska with the help of the mischievous Genies he creates along the way. Can Ash overcome his personal struggles and paint his hometown back to life?”

Pitch: “John Wick Hex is fight-choreographed chess brought to life as a video game, capturing the series’ signature gun fu style while expanding its story universe. Players must make quick decisions and choose every action and attack they make, all the while considering their immediate cost and consequences.”

Pitch: “Indivisible is an action RPG / platformer featuring stunning hand drawn art and animation combined with unique real-time combat mechanics. Immerse yourself in a fantastical world with dozens of playable characters, a rich storytelling experience, gameplay that’s easy to learn but difficult to master, and the trademark razor-sharp quality that Lab Zero Games is known for! Our story revolves around Ajna, a fearless girl with a rebellious streak. Raised by her father on the outskirts of their rural town, her life is thrown into chaos when her home is attacked, and a mysterious power awakens within her.”

Pitch: “GRID is a racing experience like no other. Offering unrivalled wheel-to-wheel racing, GRID returns with an all-new experience where every race is the chance to choose your own path, create your own story and conquer the world of Motorsport.”

Platforms: PC, PS4, and Xbox One

Pitch: “The Bradwell Conspiracy places the player as an unnamed museum visitor waking up in the aftermath of an explosion at the Bradwell Stonehenge Museum. To escape the chaos they must work with Amber, a Bradwell employee trapped elsewhere in the collapsing building. Due to an injury, the player’s means of communication is sending pictures to Amber via a pair of Bradwell AR Smart Glasses.”

Pitch: “Embark on a charming farming adventure with Doraemon and friends! Doraemon, the endearing cat-type robot that captured the hearts of millions worldwide, arrives for another adventure in Doraemon Story of Seasons! Dive into a new world that combines relaxing gameplay with a story of farming, friendship, and helping others. Grab a shovel and join the fun!”

Pitch: “The three heroes of the best-selling adventure series are back, sent on a quest to retrieve the troubled young Prince Selius. Amadeus the Wizard, Pontius the Knight, and Zoya the Thief are joined together once again on a thrilling quest through fantastical fairytale landscapes teeming with danger. Prince Selius suffers from intensely dark dreams and due to his magical talents, monstrous nightmares are able to slip into reality and wreak havoc on the waking world. Amadeus, Pontius, and Zoya must find the afflicted prince and resolve the desperate situation before the world is engulfed by the Nightmare Prince’s shadows.

Pitch: “Fight for your hive in this strategic team platformer with three ways to win! Hop on the snail, hoard berries, or wipe out the enemy’s queen to claim victory.”

Platforms: Nintendo Switch and PC (coming to Xbox One “later”)

Pitch: “A gorgeous action adventure on an epic scale. Play as Rusty—a kind-hearted, but clumsy adventurer who accidentally starts a chain of events which will destroy his world. Solve mind-bending puzzles, fight challenging enemies, defeat huge bosses and platform your way through a fantastic open world in this lavish take on classic action adventure games.”

Pitch: “Yooka-Laylee and the Impossible Lair is a brand-new platform adventure from some of the key creative talent behind Donkey Kong Country. With their arch-nemesis Capital B up to no good, the buddy duo needs to spring into action once again to save the day. To thwart his evil plan of using a ‘Hivemind’ device to enslave an entire kingdom of bees, our heroes need to take the fight to Capital B’s ‘Impossible’ Lair. Things look tough, but with the help of Queen Phoebee and her Royal Beetallion , Yooka and Laylee might just have a chance!”

Pitch: “Set in a far corner of space, Valfaris is a heavy metal-infused 2D action platformer and the next game from the team behind Slain: Back From Hell. After mysteriously vanishing from galactic charts, the fortress of Valfaris has suddenly reappeared in the orbit of a dying sun. Once a self-contained paradise, the grandiose citadel now plays host to an ever-growing darkness. Therion, a fearless and proud son of Valfaris, returns to his home to uncover the truth of its doomed fate and to challenge the arcane evil at its very heart.”

Platforms: Nintendo Switch and PC (coming to PS4 and Xbox One in November)

Pitch: “1924. Private Investigator Pierce is sent to look into the tragic death of the Hawkins family on the isolated Darkwater Island. Soon enough, Pierce is pulled into a terrifying world of conspiracies, cultists, and cosmic horrors. Nothing is as it seems. Sanity is an irregular bedfellow, all too often replaced by whisperings in the dark. Strange creatures, weird science, and sinister cults dominate the Cthulhu Mythos, intent on realizing their mad schemes to bring about the end of everything.”

Platforms: PS4 and Xbox One