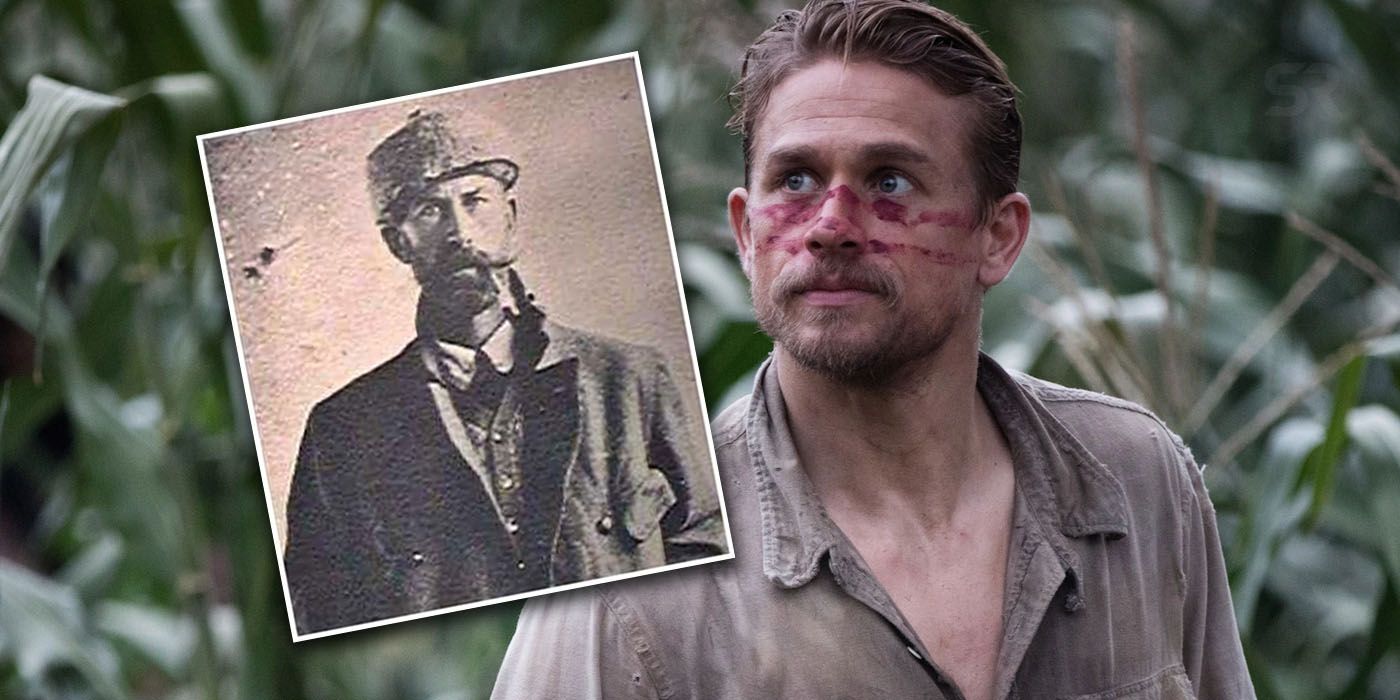 The Lost City of Z movie told the true story of British explorer Percy Fawcett (Charlie Hunnam) but condensed his life to suit the film’s running time. Directed by James Gray (Ad Astra), The Lost City of Z is based on the 2009 book of the same title by David Grann, who embarked on his own journey into the Amazon to retrace Fawcett’s path, uncovering new evidence on how he may have died. The film keeps Fawcett’s final fate ambiguous, leaving it to the audience’s imagination to decide what happened to Fawcett and his companion and eldest son, Jack (Tom Holland).

The Lost City of Z spans 1905 – 1925 and details how Percy Fawcett was tasked by Sir George Goldie (Ian McDiarmid) and the Royal Geographical Society to survey the Amazon jungle between the borders of Bolivia and Brazil, which are on the brink of conflict. Fawcett agrees to restore his family’s good name, which had been ruined by his alcoholic father. En route to Brazil, Fawcett meets Corporal Henry Costin (Robert Pattinson), an explorer knowledgable about the Amazon. Despite near-fatal encounters with the local Indian tribes, Fawcett completes the mission and he discovers pottery that leads him to believe in the existence of an ancient lost city of gold.

Next: Mary Queen of Scots True Story: What The Movie Gets Right And Changes

Fawcett’s belief in this “Lost City of Z” is further fueled by his discovery of a conquistador text referencing such a place. Fawcett’s second expedition to find the Lost City, financed by Scottish biologist James Murray (Angus Macfadyen) ends in disaster and Fawcett resigns from the RGS. After fighting in World War I, Fawcett’s third expedition into the Amazon is financed in 1923 by a consortium of American newspapers eager for him to discover the fabled ancient city. Fawcett and his son Jack embark on their mission, but after a strange encounter with the natives, Percy and Jack vanish in the jungle in 1925. Left behind in England, Fawcett’s wife Nina (Sienna Miller) believes her husband and son are still alive.

The biggest change The Lost City of Z makes to Percy Fawcett’s true story is boiling down his eight expeditions into the Amazon to just three. Further, Percy’s final journey was depicted to just be him and Jack, which pays off the father-son conflict of the film where Jack accuses Percy of abandoning the family while he explored the jungle and fought in the Great War. In reality, there was a third person who joined the Fawcetts: Raleigh Rimmell, who was Jack’s friend. All three of them vanished in the jungle in 1925 and were never heard from again. Fawcett’s expedition was financed by J.D. Rockefeller and American newspapers, and he suddenly stopped sending dispatches from the jungle. Nina Fawcett received a letter from Percy dated May 29, 1925 – the last correspondence ever from Fawcett – that said “You have no fear of any failure.” referring to his search for the Lost City of Z.

After Fawcett vanished, 13 expeditions were sent into the Amazon to find him and, later, determine how he died. Peter Fleming, the brother of James Bond creator Ian Fleming, went on one of these failed expeditions. In 2005, author David Grann went into Brazil to retrace Fawcett’s steps. In his book, he determined that Fawcett and his team made to Dead Horse Camp, where the Kalapalo natives told Grann that there was a white explorer (believed to be Fawcett) who was warned not to go eastward into hostile territory controlled by “fierce Indians.” The men ignored the warning and never returned. If this was Fawcett and his group, then they were likely killed by the neighboring hostiles. Alternatively, they may have simply succumbed to illness in the unforgiving jungle.

Fawcett gained a reputation as one of Britain’s greatest explorers, and the adventures of Indiana Jones were partially inspired by Fawcett’s explorations. However, in 2017, Canadian explorer John Hemming published a scathing dismissal of Fawcett’s legend and portrayal in the film, calling him “a racist” and “a nutter.” In The Lost City of Z, Fawcett argued in front of the RGS that the Amazon natives were equal to Europeans – a scene that was fabricated. The real Percy Fawcett was respectful but looked down on South Americans since, despite his travels, he was still a product of Victorian/Edwardian society.

Tags:
the lost city of z