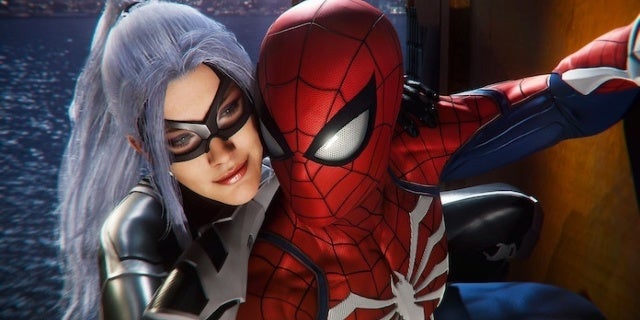 This week at New York Comic Con, Marvel announced Marvel’s Spider-Man: The Black Cat Strikes, a five-issue limited series comic based within the universe of Marvel’s Spider-Man, Insomniac Games’ PS4 exclusive that released last year to critical-acclaim. The comic is being written by Dennis “Hopeless” Hallum, and features art by Lucas Maresca. At the moment of publishing, a specific release date hasn’t been divulged, but we do know it will hit comic stores sometime next year in January.

“Following the events of Marvel’s Spider-Man: Velocity and City at War, Spider-Man now finds himself in the middle of a gang war in New York City,” reads an official pitch of the comic. “But as he butts heads with the likes of Hammerhead and the Maggia, the unexpected reappearance of old flame Felicia Hardy AKA the Black Cat sets Spider-Man’s world on fire!”

“Black Cat’s heroic days are behind her, but what is the secret behind the treasures she’s thieving? And why would Spider-Man let her go,” continues the pitch. “Delve into previously untold tales of Spider-Man and Black Cat’s relationship, and a shock ending that will make your webs spin! Don’t miss the excitement as your favorite Wall-Crawler returns in the next Gamerverse series coming in January!”

As you may know, Insomniac Games began work on a sequel to Marvel’s Spider-Man earlier this year. That said, it’s unclear when will see the follow-up. It will definitely be on PlayStation 5, but who knows how early into the console’s cycle. If I was a betting man, I’d place my bet on 2021. Whatever the case, it seems Marvel is once again turning to comics to hold over fans.

Marvel’s Spider-Man is available for the PS4 and the PS4 only.

“Marvel’s Spider-Man is the best superhero movie you can’t buy a ticket to see, and it’s one of the best open-world games of the generation,” reads the opening of our official review of the game. “Insomniac Games has shown great audacity in its effort to craft a wholly original Spider-Man story, with its own timeline and set of origin stories. Having played the game from start to finish, I can say that even the most hardcore comic book fans will have their expectations exceeded by Marvel’s Spider-Man’s impossible scope and exhaustive fan service.”

Ari Lennox Performs “Waste My Time” at the 2022 Soul Train Awards: Watch
The World Cup (sort of) sneaks onto Game Pass today
‘Something in the Dirt’ Review – A Heady Sci-Fi Tale of Friendship and Phenomena
Psychological Horror Game ‘The Lies We Tell Ourselves’ Looks Inward For Real Scares
What to Watch: Gossip Girl, Firefly Lane, Irreverent