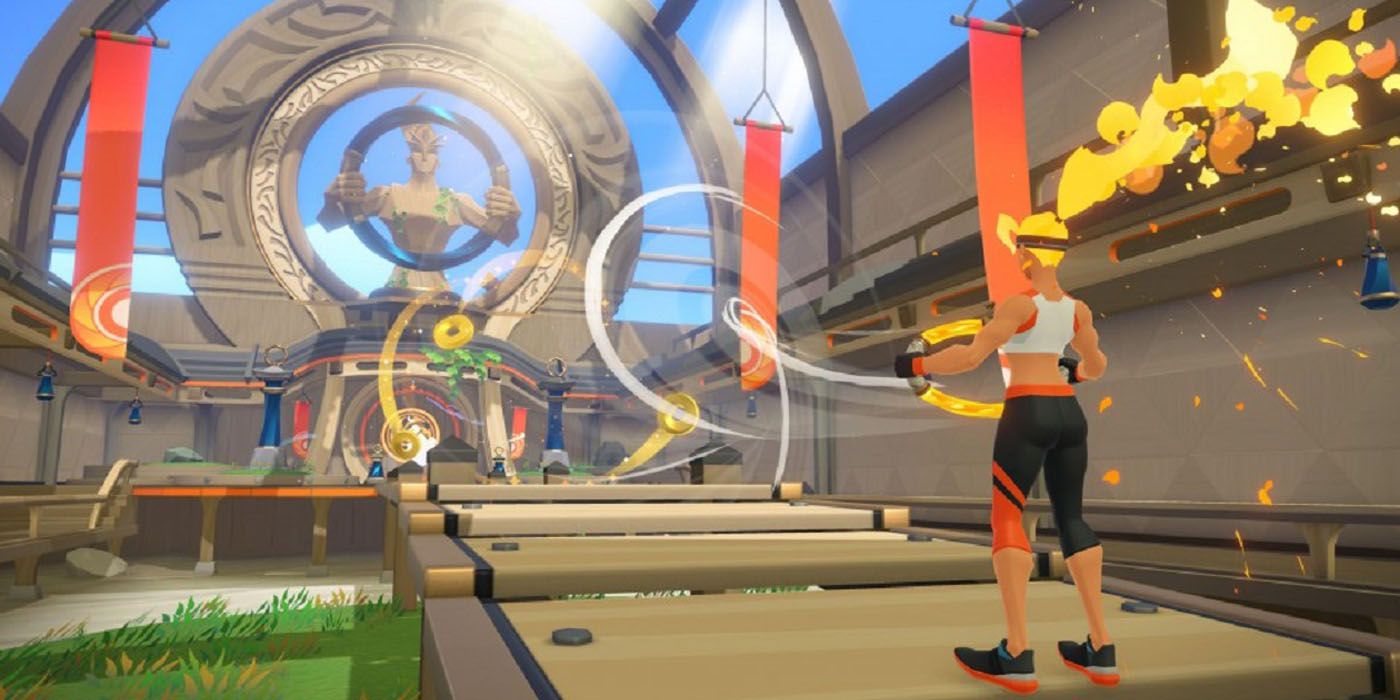 I have to admit that I was unsure of how I’d feel about Ring Fit Adventure ahead of my hands-on time with it. To me it seemed like the game was aimed at a more casual audience, which is fine, but I never really got into Wii Fit or any of those initatives in the past. After strapping a Joy-Con to my left leg and grabbing hold of the Ring-Con, I was propelled into an environment that Nintendo designed to encourage rather than simply exhaust. Ring Fit Adventure immediately had my full attention.

I wouldn’t consider myself to be a physical specimen by any means. I try to go to the gym at least twice a week and keep tabs on my caloric intake, but I’ve always struggled with cardio; I find it boring. Music is something I use to distract myself from the pains of that type of exercise. In that same line of thought, I found that Ring Fit Adventure wasn’t only a distraction from the activity, but an engaging way to make me excited about it.

During my hands-on time with the campaign portion of Ring Fit Adventure, I was thrown into a segment that involved running in place in order to progress through the level. As I did this, the on-screen character began jogging through the level. If I sped up, they sped up. As I continued, I noticed that there were collectibles and destructible items that I could interact with via the Ring-Con. Pushing the sides of the device inward allowed me to shoot energy out at objects, while pulling the sides outwards created a vortex that pulled items in. This added a whole new level of interaction and distraction to the exercises.

Every once in a while, I’d also be interupted by a villain that triggered a turn-based battle. These baddies can be dispatched through various activities while playing, ranging from arm and chest exercises to squats and knee lifts. I was having a blast just going through the paces and taking out each of these gym-themed bad guys, and every time I defeated them I’d gain experience points. This is another fanatastic edge that Ring Fit Adventure has over any other fitness game.

Adding RPG elements to real-world physical activities (especially ones that I don’t care for) was instantly appealing for a major reason. Namely, I could track my progress on levels that aren’t possible with standard gym equipment. There’s a reason to keep playing and to keep pushing yourself so that you can achieve new personal bests and see your real-world growth reflected in your on-screen character.

As I wrapped up the level, the screen informed me that I had been playing for roughly 20 minutes and in that time I had run over 3km. Stunned is the word I’d use to describe my reaction, because (despite feeling a little tired upon reflection) I was feeling great. Perhaps a little sweaty, sure, but great nonetheless! Not only that, but I wanted to keep playing. I was hooked.

My initial impression is that Ring Fit Adventure is a fitness option on a whole new level. There’s so much to do and the game provides so many layers of distractions that exercising is, for the first time to me, enjoyable. In truth, I’m looking forward to jumping back in as soon as possible. I can see cardio through Ring Fit Adventure being something I look forward to rather than something I feel obligated to do. That’s a huge win in my books.

Next: Ori and the Blind Forest Runs Better on Switch Than on Xbox