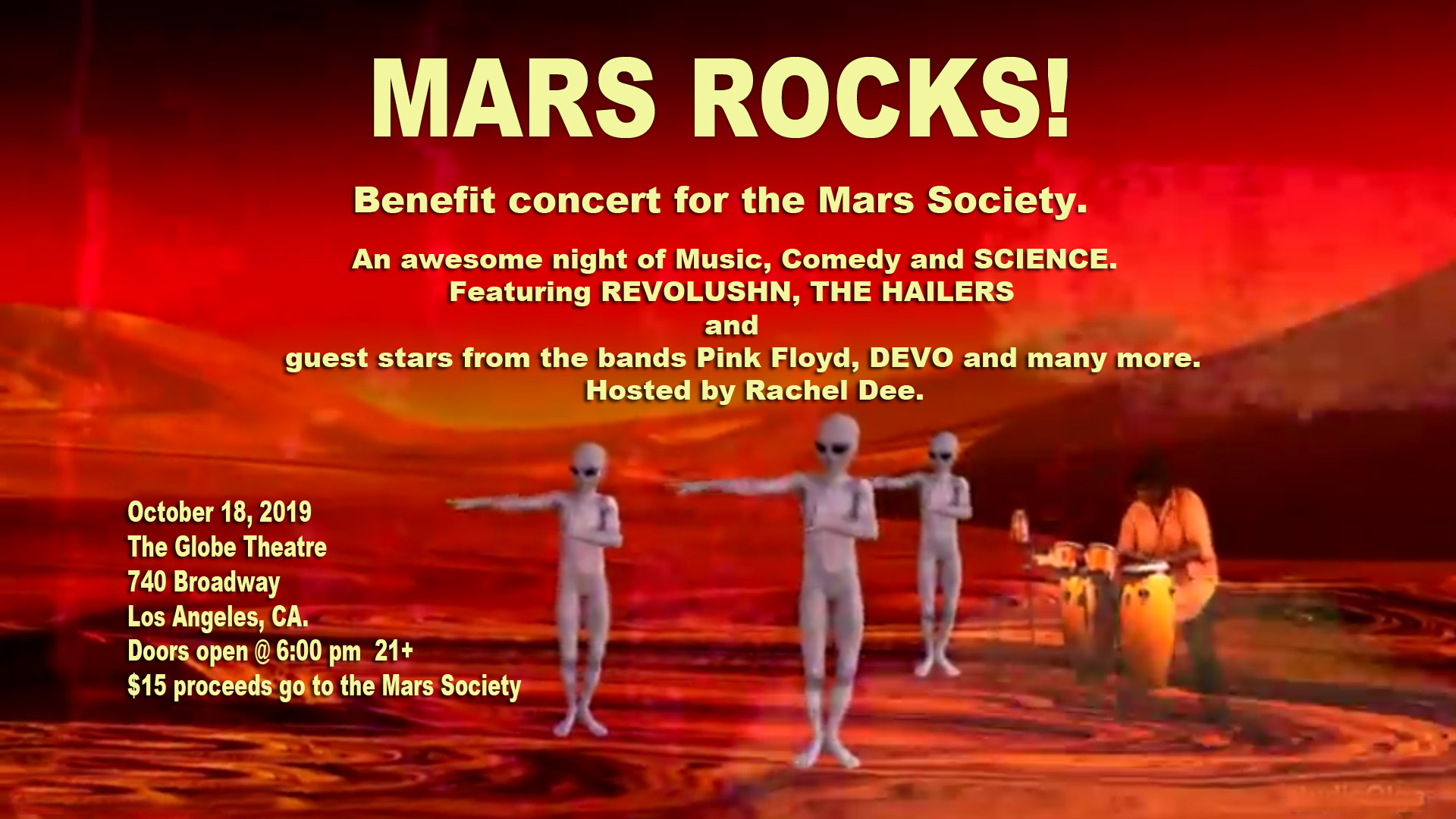 On October 18, 2019 there will be a rare, one of a kind concert called “Mars Rocks” at the Globe Theater in L.A. This alien/space inspiring orchestration will be benefiting the “Mars Society” in celebration of the 22nd annual Mars Society Conference. The Mars Society is a non-profit organization dedicated to the education of the public, the government and the press regarding the exploration and settlement of the “Red Planet.”

Featured on stage will be “No”, and his Revolushn psyche rock band with Dave Kendrick from Devo, The Hailers with Scott Page from Pink Floyd, Shankar, internationally renowned composer, violinist and vocalist, and Gareth Johnson, world renowned global hip-hop violinist. There will be a Celebrity Red Carpet, with a list of stars to be announced including:

“No” Mansfield is probably the most unlikely scientist known to man. As a musician he has played with the likes of Rod Stewart, Aretha Franklin, Berlin, Devo, and many others. He is currently the front man for Revolushn, the popular California Psyche band.

I spoke with No regarding this phenomena including his take on science, music and aliens..

Why a Mars Rocks concert benefit?

I would say it is a celebration as much as a benefit. I mean they can always use more money but when we first thought of this it was to raise awareness of how close we are to seeing humans on Mars. Just last week Elon Musk (a Mars Society member and supporter) blasted the crew module into the air. It was just a test, but things are moving along quickly. This concert will feature musicians, scientists, comedians and a couple aliens and we are all there to promote space exploration, specifically to Mars.

As a singer/songwriter, composer, how did you and how are you involved with Mars?

I was living in Denver and designing houses and nightclubs and playing in local bands. I had this crazy girlfriend who one day says, “Let’s go to the Mars Society Conference”. I had no idea who they were, but it sounded fun. I must have given my name to someone there, because they called me a month later and asked if I would like to volunteer help design and build a Mars Habitat. Sounded fun so I said yes. Well, they are great scientists and all, but they are not really good at design for humans or at building things.

Anyway, they ended up using a design I did for a Mars habitat module. So, I got more involved, ended up going to the North Pole to build the first habitat module and eventually ended up running the program. I have been at least peripherally involved ever since.

Would you go to Mars if you had the opportunity, if so why or why not?

Well, I am kind of busy on this planet at the moment so………. But really I have spent a lot of time in the habitat modules, both building them and doing crew simulations ,and the reality is that it would be a long boring ride there (6-7 months), approximately 18 months before you can leave and then another 8-9 month ride to get back. And most of that time would be spent in a tin can the size of a small house trailer with 5 other humans. On the other hand, what a trip that would be monumental.  I think just the idea of being on another planet is exciting. But I am not sure it would look much different from looking out the Mars Desert Research Station window (what we call the hab in Utah) and it would smell a lot worse!

What can the audience expect seeing this show? What are you most excited about?

Well, first off, they will see two great bands with a lot of famous musicians in them. Both bands are top shelf groups. That is the part I am excited about but there will be a lot more. We will have several celebrities there, a very cool VIP section, a super funny comedian, several famous scientists and engineers and a red carpet. Also, The Globe Theater is an awesome venue. It takes it’s theme from The Globe Theater in London, the one where Shakespeare worked.  Only the Globe in LA is a lot bigger and a lot cooler. I used to design night clubs and I can tell you this one is over the top.

Do you believe in aliens?

Of Course! But are you asking do I think they are here and watching us? Maybe. But unless they are buying Revolushn’s new album and coming to our shows I don’t really care.

How can the scientists of the world and the general public come to Mars Rocks?

Come to The Globe Theater at 740 Broadway in Los Angles on October 18th at 6:00 PM. It will be epic. Also, the Mars Society Conference is from October 17-20 at the USC campus in Los Angles. It will be a super weekend. https://www.marssociety.org

You are a Music virtuoso as well as a scientist, how did that happen, and how do you  get those elements to work together?

You are too kind. But I am not a scientist! Scientists are lame. I am an engineer! There is a big difference. Scientists think up stuff and don’t really care if it is real or buildable. Or in many cases provable. They like thinking of stuff and engineers like building stuff. And although I do remember being little and looking at the sky and thinking I am going there, the music came first. I have been plucking on things, banging on things or humming since I was born. I kind of always knew music but had to learn the science and engineering stuff.

Help!!! The aliens are trying to probe me