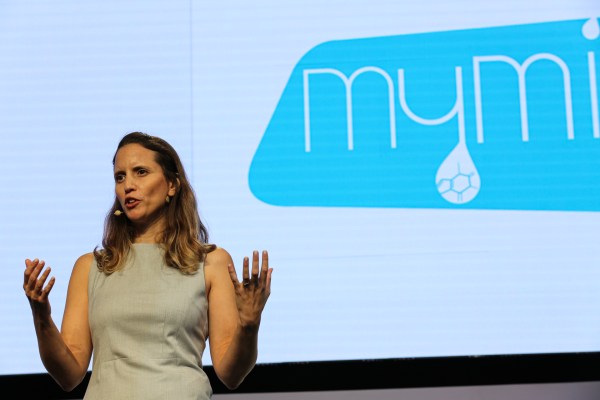 Many expectant mothers are told that breastfeeding will come naturally, but it is often a fraught and confusing experience, especially during the first few weeks after birth. Parents often worry about if their babies are getting enough nutrition or if they are producing enough milk. MyMilk Labs wants to give nursing mothers more information with Mylee, a sensor that scans a few drops of breast milk to get information about its composition and connects to a mobile app. The Israel-based company presented today at Disrupt Battlefield as one of two wild card competitors picked from Startup Alley.

The Mylee launched at Disrupt with a pre-order price of $249 (its regular retail price is $349). Based in Israel, MyMilk Labs was founded in 2014 by Ravid Schecter and Sharon Haramati, who met while working on PhDs in neuroimmunology and neurobiology, respectively, at the Weizmann Institute of Science. 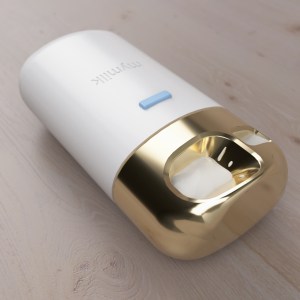 During the company’s stage presentation, Schecter said the device is meant to give mothers and lactation consultants objective information about breast milk.

Breast milk changes in the first days and weeks after birth, progressing from colostrum to mature milk. Mylee scans the electrochemical properties of milk and then correlates that to data points based on MyMilk Labs’ research to calculate where the sample is on the continuum, then tells mothers if their milk is “delayed” or “advanced,” relative to the time that has passed since they gave birth.

The device’s first version is currently in a beta pilot with lactation consultants who have used them to scan milk samples from 500 mothers.

MyMilk Labs already has consumer breast milk testing kits that enable mothers to provide a small sample at home that is then sent to MyMilk Labs’ laboratories for analysis. One is a nutritional panel that gives information about the milk’s levels of vitamins B6, B12 and A, calories and fat percentage, along with dietary recommendations for the mother. Another panel focuses on what is causing breast pain, a frequent complaint for nursing mothers. It tests for bacterial or fungal infections and gives antibiotic suggestions depending on what strains are detected.

Though some doctors believe testing kits are unnecessary for the majority of nursing mothers, there is demand for more knowledge about breastfeeding, as demonstrated by the line-up of breast milk testing kits from MyMilk Labs and competitors like Lactation Labs, Everly Well and Happy Vitals. Haramati said on stage that MyMilk Labs plans to eventually transfer some of the tests’ capabilities to the Mylee.

“Supernatural” Prequel Series “The Winchesters” Will Premiere in October
Pure Chase 80’s Review
AI seems to be better at distributing wealth than humans are, study hints
3 questions for the startup market as we enter Q3
Occupy White Walls review: create and curate your own personal art gallery