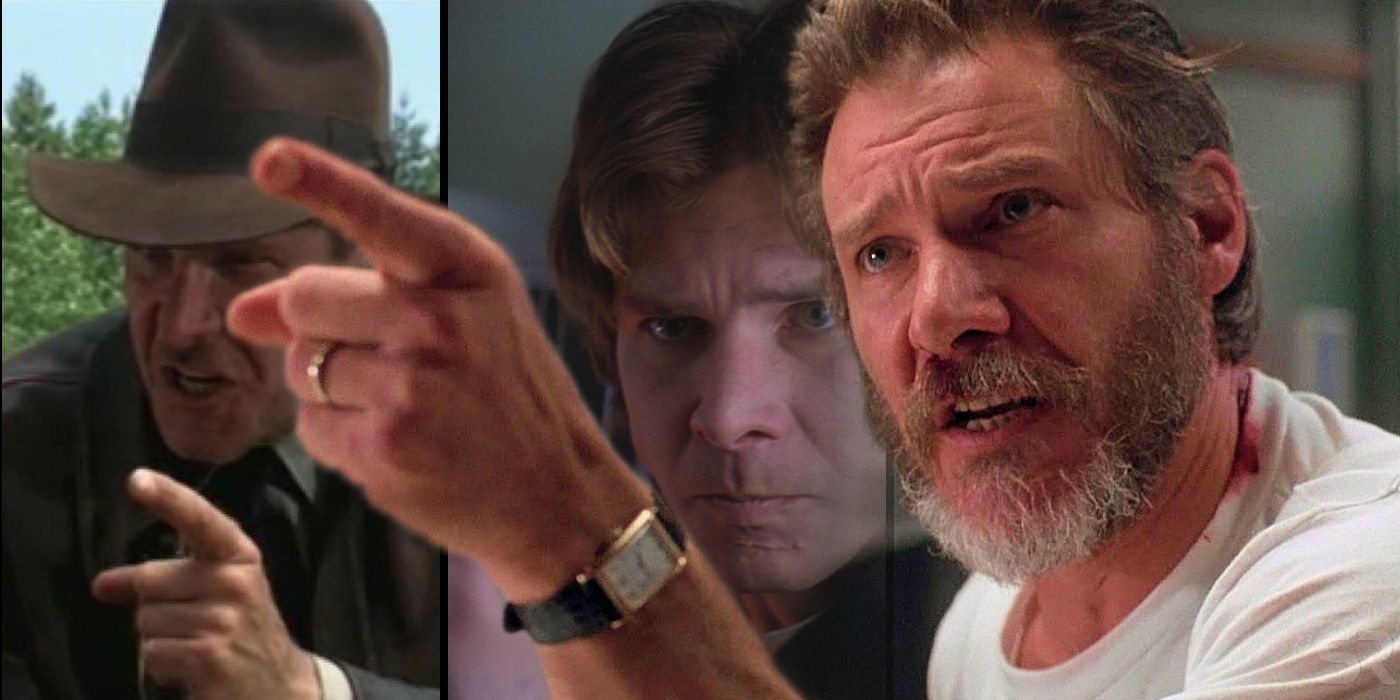 Harrison Ford points angrily in most of his movies – but why? Beloved for his iconic roles in Star Wars and as Indiana Jones, Ford is one of the most famous and highest-grossing movie stars in the world. The 77-year-old screen legend has appeared in over 50 films in his career but in a large amount of them, Ford regularly displays his go-to hand gesture of pointing with his index finger, which is often jokingly referred to on the Internet as the “Harrison Ford Finger of Doom”.

Plenty of famous actors have signature moves in their acting arsenals; for example, Keanu Reeves often says “Whoa!”, Sean Bean dies in most of his movies, and Samuel L. Jackson has a particular affection for “MF-bombs”. However, Harrison Ford’s finger-pointing is rather distinctive and the actor has been doing it throughout his storied career. Among the films that Ford can be seen pointing his index finger are A New Hope, The Empire Strikes Back, Indiana Jones and the Last Crusade, Witness, The Mosquito Coast, Extraordinary Measures, Air Force One, K-19: The Widowmaker, and Clear And Present Danger. Ford even did it, albeit among numerous other hand gestures, in one of his earliest roles as hot rod driver Bob Falfa in American Graffiti.

But why does Ford point his finger so much and when does he unleash his Finger of Doom? Most often, Harrison likes to point his finger when his character is angry. As seen in Clear and Present Danger when a furious Jack Ryan is telling the CIA Deputy Director Bob Ritter (Henry Czerny) that he’ll expose his dirty dealings, Ford aggressively points his finger to emphasize Jack Ryan means business. In The Empire Strikes Back, Han Solo tightened his lips and pointed in the air to demand silence and Indiana Jones liberally points at his father Dr. Henry Jones, Sr. (Sean Connery) as they argued in The Last Crusade. However, Ford’s Finger of Doom doesn’t only come up when his character is upset; in an early scene in The Fugitive when Dr. Richard Kimble is speaking to his wife Helen (Sela Ward), Ford still points at her, albeit affectionately and in a non-threatening manner.

Ford is also not picky about which hand he uses to point his finger; in his films, the actor has proven himself ambidextrous and freely switches between his right and left hand to point, often in response to the camera’s placement. Nor is Ford always pointing at someone; he’s just as happy to point upwards or in any direction or sometimes towards no one or at nothing in particular while he’s making his point.

In a deleted scene that was added to the Star Wars: Special Edition, when Jabba the Hutt meets Han Solo at the Mos Eisley spaceport, the cocky smuggler not only chooses to point at Jabba but he then immediately inverts his index finger and points at himself, proving Ford is just as willing to make himself the target of his infamous finger as he is whomever his scene partner happens to be.

As to the whys behind his Finger of Doom, Ford is infamously reticent and he has never offered an explanation for his unique acting technique. But he’s certainly aware that he does it; when Ford was a guest on Conan O’Brien‘s show in 2013, the talk show host amused the actor with a supercut video compilation of Ford’s finger-pointing in his movies. After seeing it, Ford enjoyed a hearty laugh but he offered no justification for the method behind his favorite move. But then again, at that same interview, Ford pocketed $1000 cash that Conan offered him for Star Wars spoilers without divulging any details, so that was one instance where Harrison Ford proved he could make his point without pointing with his index finger.

Next: Harrison Ford Doesn’t Want Anyone To Replace Him As Indiana Jones EVER

Julia Garner Sits Front Row at Drag Show and Gets Props for Madonna Role
R. Kelly ‘Survivor’ Kitti Jones Says He Needs To Admit What He Did, Get Therapy
‘The Shining’ Actor Joe Turkel Has Passed Away at 94
Parts of the world now have drought patterns that haven’t been seen in 1,200 years
This record-fast nova could be seen with the naked eye for a day and then vanished