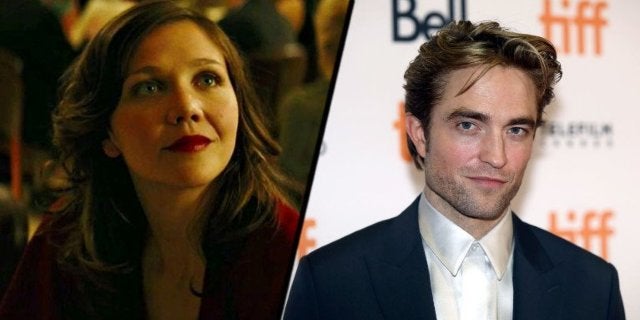 Maggie Gyllenhaal on Robert Pattinson as #Batman: “I really like him” | #TheIrishman #NYFF pic.twitter.com/v3icVfGyG4

Maggie Gyllenhaal played Rachel Dawes in The Dark Knight, the most critically-acclaimed Batman movie ever. She acted opposite Christian Bale as Batman. Now, another actor is stepping into that role. Robert Pattinson will take over the role in a new film directed by Matt Reeves. At the New York Film Festival premiere of The Irishman, Gyllenhaal shared her thoughts on Pattinson as Batman. “I really like him,” she said, and agreed that she thinks he’s going to be great in the role. “I think he’s a really really good actor. I really do. I think he’s a super compelling actor. I think… I don’t know, I think that’s going to be great.”

At the Toronto Film Festival earlier this month, Bale shared his own thoughts on Pattinson as Batman. Bale said Pattison is a “good choice” and that he’s “sure he’ll come up with something interesting.”

Bale also offered Pattison some advice. “Just make it his own, don’t listen to the naysayers,” Bale said. “That’s about it. Everybody protested when Heath [Ledger] was cast as the Joker. Look what an absolutely brilliant performance he gave. Don’t listen to those guys, do his own thing. He’s a fascinating actor, he’s a great choice.”

Pattinson is already at work on pre-production for the film. He spoke in a recent interview about putting his Batsuit on for the first time.

“It’s maybe the craziest thing I’ve ever done in terms of movie stuff,” Pattinson explained in an interview. “I put it on. I remember saying to Matt [Reeves], ‘It does feel quite transformative!’ He was like, ‘I would hope it does! You’re literally in the Batsuit.’

“And it’s pretty astonishing, something that is incredibly difficult to get into, so the ritual of getting into it is pretty humiliating,” Pattinson shared. “You’ve got five people trying to shove you into something. Once you’ve got it on, it’s like, ‘Yeah, I feel strong, I feel tough, even though I had to have someone squeezing my butt cheeks into the legs.’”

As for how he’s mentally preparing for the role, Pattinson said in another interview that “There’s a lot going on in here, lots of things going on in my head.”

What do you think of Robert Pattinson’s playing Batman? Let us know in the comments. The Batman opens in theaters on June 25, 2021

Upcoming DC Extended Universe movies include Birds of Prey (And the Fantabulous Emancipation of One Harley Quinn) on February 7, 2020, Wonder Woman 1984 on June 5, 2020, and The Suicide Squad on August 6, 2021.