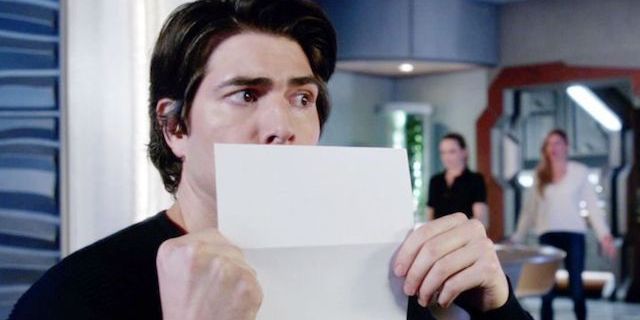 On the heels of fans getting their first look at Clark Kent (Tom Welling) and Lois Lane (Erica Durance) from the upcoming “Crisis on Infinite Earths” crossover event, Superman Returns star Brandon Routh released a photo on Instagram teasing the return of his take on the Man of Steel, too. You can see his post below — bathed in shadow, Routh reveals that he is getting a VFX scan for his “Kingdom Come” Superman costume for the crossover, and suggests that the first look is coming soon. The photo’s caption, “Returning Soon,” is a play on the title of Routh’s 2006 movie, Superman Returns.

Routh’s Superman Returns was a sequel to Superman and Superman II, but ultimately did not take hold with audiences, so it never got a sequel. In the years since the movie was released, Routh has built up a following, with fans saying that he was the best part of the movie and that it wasn’t his performance but the screenplay that failed to resonate.

“Crisis on Infinite Earths” has loomed over the Arrowverse for years. The series premiere of The Flash featured an allusion to the hero disappearing amid red skies in the year 2024. During the original comics event, red skies were a sign of doom to come to a world during the Crisis. At the end of last season, a couple of things happened: The Monitor (LaMonica Garrett), who had appeared in “Elseworlds,” reappeared and revealed that Oliver Queen was destined to die in the Crisis…and the future newspaper at STAR Labs rolled back the expected date of the Crisis from 2024 to 2019.

In the comics, Crisis on Infinite Earths centered on a battle between the combined superheroes (and even some villains) of the DC multiverse and an immortal, cosmic threat known as the Anti-Monitor. Like The Monitor, the Anti-Monitor will be played by LaMonica Garrett in the Arrowverse. As the Anti-Monitor destroys realities, he replaces their positive matter energy with antimatter, growing his own power and sphere of influence. He was eventually stopped by the sacrifices of several heroes, including The Flash and Supergirl, as well as the merging of multiple universes to save reality by becoming a single, unified timeline. Fans have long wondered whether the events of “Crisis on Infinite Earths” might bring Supergirl and even Black Lightning to Earth-1, where the rest of the series take place. The crossover will also feature guest appearances by Tom Welling as Clark Kent, Erica Durance as Lois Lane, John Wesley Shipp as the Flash of Earth-90, Johnathon Schaech as Jonah Hex, Kevin Conroy as Bruce Wayne, and Brandon Routh as Superman.

“Crisis on Infinite Earths” will air on The CW this winter, taking place on five episodes of TV over two quarters — one each of Arrow, The Flash, Supergirl, DC’s Legends of Tomorrow, and Batwoman. Are you excited for the Crisis? Chime in below or tweet your thoughts to @russburlingame.