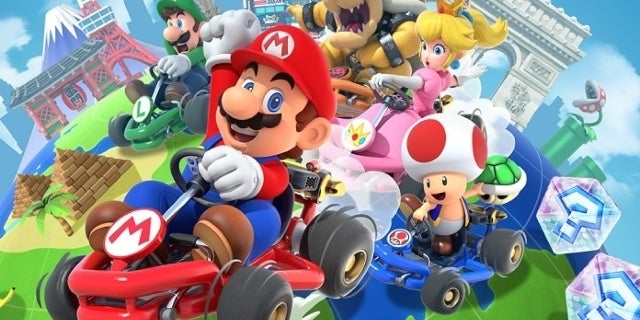 Mario Kart has now gone fully mobile for the first time with the release of Mario Kart Tour, the racing game that’s now available for Android and iOS devices. The game launched on September 25th after a brief maintenance hiccup that prevented some from playing immediately and has now opened its tracks to racers around the world. Players can race as different characters from around the Mushroom Kingdom and collect different racing components and accessories while navigating the typical mobile monetization system.

To start in Mario Kart Tour, you’ll take instructions from a Lakitu to hit a green pipe which serves as the game’s loot dispenser. A driver will shoot out from the pipe – it looks like all players start with Toadette – and you’ll then take part in your first race. Two different control schemes are available for people to pick their preferred layout, and once you finish that race, you’ll be able to hit the pipe again to get another driver. After that, Mario Kart Tour cuts you (mostly) loose to head to the races as you unlock more features by completing the various Cups.

Part of the appeal of Mario Kart Tour is that it’ll incorporate courses that players already recognize from past Mario Kart games as well as courses inspired by real locations around the world. Some of those tracks are already available with others planned to be released in future updates.

Race around the world across a variety of new and classic courses! We hope you enjoy this first tour! Be sure to stay tuned here for the latest game news, because we’ve got a lot more coming.

“Mario and friends go global in this new Mario Kart as they race around courses inspired by real-world cities in addition to classic Mario Kart courses!” a preview of the upcoming selection of courses said. “These destinations will be featured in tours that rotate every two weeks! In addition to courses based on iconic locales, some of your favorite Mario Kart characters will get variations that incorporate the local flavor of cities featured in the game!”

The game currently doesn’t have a multiplayer feature, a development which may frustrate those who were planning on showing off their Mario Kart skills built up over the years. You’ll get the chance to race against others eventually though when a multiplayer feature is added in a future update, according to some descriptions of the game’s features in the menus.