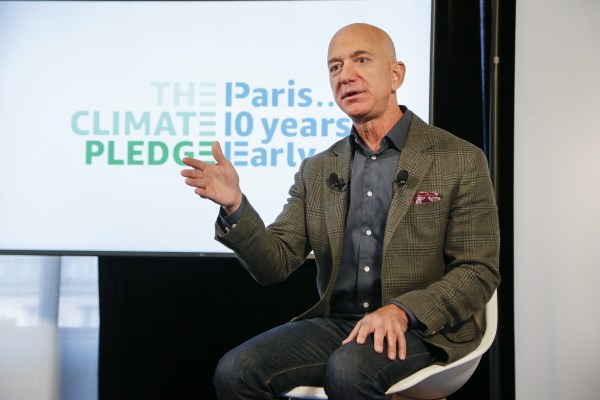 In Washington today, Amazon announced a series of initiatives and issued a call for companies to reduce their carbon emissions 10 years ahead of the goals set forth in the Paris Agreement as part of a sweeping effort to reduce its own environmental footprint.

“We’re done being in the middle of the herd on this issue—we’ve decided to use our size and scale to make a difference,” said Jeff Bezos, Amazon founder and chief executive, in a statement. “If a company with as much physical infrastructure as Amazon—which delivers more than 10 billion items a year—can meet the Paris Agreement 10 years early, then any company can.”

Bezos’ statement comes as employees at his own company and others across the tech industry plan for a walkout on Friday to protest inaction on climate change from their employers.

Amazon’s initiatives include an order for 100,000 delivery vehicles from Rivian, a company in which Amazon has previously invested $440 million.

In addition, Amazon said it would commit another $100 million to reforestation projects through the Right Now Climate Fund in partnership with The Nature Conservancy. That fund will invest in the protection of forests, wetlands and peatlands that now serve as carbon sinks, which remove millions of metric tons of carbon from the atmosphere.

Amazon has already initiated 15 utility-scale wind and solar renewable energy projects that will generate 1.3 gigawatts of renewable capacity and deliver some 3.8 million megawatt hours of clean energy, according to the company.

All of these efforts will be backstopped by a new sustainability reporting initiative, which will be housed on a new website monitoring and tracking the company’s progress toward its sustainability goals, the company said.

These steps are part of a push from Amazon to get other companies to sign on to a global non-binding agreement to accelerate the adoption of renewable energy and the reduction of carbon emissions.

Companies that sign on to the Amazon-inspired “Climate Pledge” agree to measure and report greenhouse gas emissions regularly; implement decarbonization strategies on a timeline that matches the Paris Agreement; and neutralize remaining emissions with quantifiable and permanent offsets to achieve net zero annual carbon emissions by 2040.

“I’ve been talking with other CEOs of global companies, and I’m finding a lot of interest in joining the pledge. Large companies signing The Climate Pledge will send an important signal to the market that it’s time to invest in the products and services the signatories will need to meet their commitments,” Bezos said in a statement.

The initiative is backed by international political luminaries like Christiana Figueres, the former climate change chief and founding partner of Amazon’s collaborator on The Climate Pledge, Global Optimism.

“Bold steps by big companies will make a huge difference in the development of new technologies and industries to support a low carbon economy,” said Figueres, in a statement. “With this step, Amazon also helps many other companies to accelerate their own decarbonization. If Amazon can set ambitious goals like this and make significant changes at their scale, we think many more companies should be able to do the same and will accept the challenge. We are excited to have others join.”

Best PS5 Family-Friendly Games (2022) to Play This Thanksgiving
Al Roker Misses Thanksgiving Day Parade, Watches from Home After Hospital Stay
Will Ferrell On His Reaction To Greta Gerwig’s Barbie Script And What Fans Can Expect From The Movie
Pre-Orders For Trick or Treat Studios’ New ‘The Texas Chainsaw Massacre’ Board Game Now Available
Super 7 Conan The Barbarian King Barbarian.