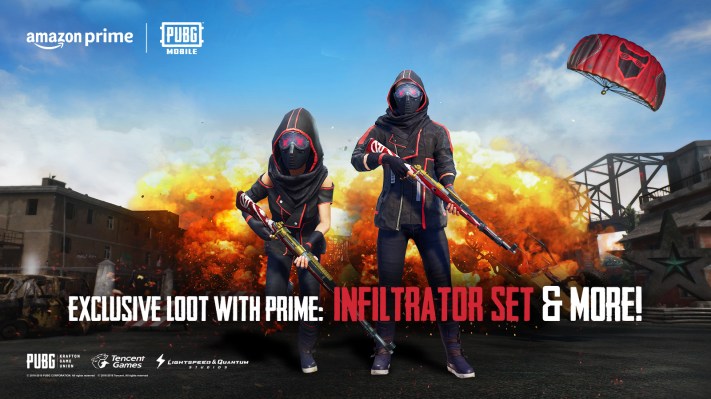 These exclusive game items aren’t just a one-off as part of a special deal between the retailer and Tencent, however.

Amazon says it will roll out new mobile gaming content on an ongoing basis, going forward, as part of the Prime membership program.

Upcoming partners will include the likes of EA, Moonton, Netmarble, Wargaming Mobile, and others, Amazon tells us.

“Now, no matter what platform you play on—whether console, PC, or mobile—there are Prime game benefits for you,” said Ethan Evans, VP, Twitch Prime, in a statement. “We’re starting with exclusive content for PUBG Mobile, one of the biggest mobile games in the world, and in the coming months, we’ll roll out benefits for some of the most popular mobile games across many favorite genres.”

Amazon’s Twitch already offers a Prime benefit called Twitch Prime which offers a range of perks, like bonuses like channel subscriptions, access to select games and in-game loot, exclusive emoticons, Prime chat badges and more. And as of yesterday, it now includes the option to share select Twitch Prime loot with other non-Prime members on Twitch. However, its focus is more on PC and console gaming, not mobile.

This isn’t the first time Amazon has pitched gaming perks to its Prime members. Several years ago, it ran a program called “Underground Actually Free” which offered customers free versions of Android apps that would typically cost money. That program, however, was more about luring Prime members to Amazon’s Fire tablets. It shut down in 2017.

Today’s mobile gaming perks instead seem to be just a better way for Amazon to leverage the relationships Twitch already has with PC and console game makers who have cross-platform titles that extend to mobile.

To claim the new perks, Prime members can visit www.amazon.com/pubgm.