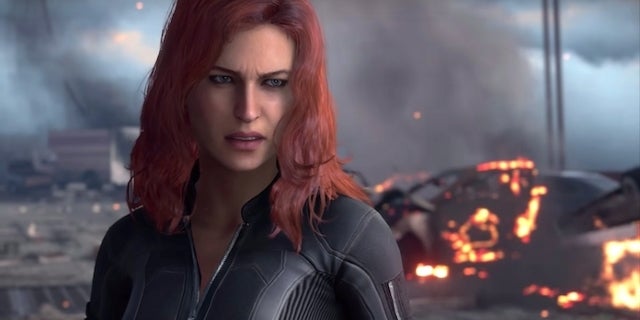 Today, developer Crystal Dynamics revealed a slew of new Marvel’s Avengers details shedding more light on Black Widow, one of the game’s five announced playable characters. More specifically, over on the game’s official Twitter account, lead combat designer Vince Napoli talked about Black Widow, and explained how she’s a complex and nuanced character. And while explaining this, the designer revealed some new gameplay and character details about the former KGB agent. According to Napoli, Black Widow’s gameplay matches her character, which seems to suggest she’s one of the more complex characters to learn.

“Black Widow is a really complex and nuanced character; so it only makes sense that her gameplay and mechanics are designed in a way that compliments those aspects of her character,” said Napoli. “In a manner that is fitting of a trained assassin, Widow’s gameplay loop is all about creating and exploiting enemy vulnerabilities. Whether attacking enemies from behind or putting enemies into stun states that lead to quick take downs, playing Black Widow is about efficiency.”

Natasha’s training and innate capability to keep cool in any situation is augmented by an array of gadgets, tools, weapons, & attacks for every scenario; including a variety of grenades, ammo types, grappling hooks, stun batons, & of course her iconic Widow’s Bite! pic.twitter.com/cQDP64mCjs

As Napoli alludes to, Black Widow isn’t going to be the Hulk: you aren’t going to charge every enemy you see and bash them into the ground. In this sense, it sounds like players will need to exercise a bit more strategy and patience when playing Black Widow.

“For example, when utilizing her grapple correctly, it’s both a pre-emptive defensive attack designed to counter enemies before they strike, as well as a move to initiate combat at large distances from the ground or in air.”

Napoli further points out that players will have the option to play up-close and personal with Black Widow, or rain down justice from afar. In other words, she’s very versatile. “Regardless of how you choose to play Widow —whether you’re focusing on subterfuge or style, gadgets or guns— her combat and gameplay style always feels distinct,” adds Napoli.

Marvel’s Avengers is in development for PS4, Xbox One, PC, and Google Stadia. Barring any delay, it will release worldwide on May 15, 2020. For more news, media, and information on the game, be sure to check out all of our past and extensive coverage of the Marvel title by clicking right here.