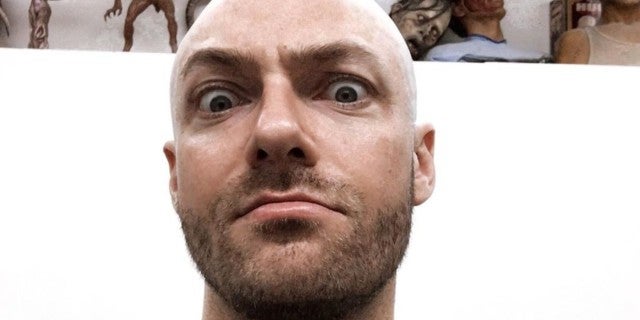 Whether it’s a post-apocalyptic zombie wasteland or a lifeless rock at the end of space and time, actor Ross Marquand is no stranger to uncomfortable situations — which is probably why when he (former Red Skull that he is) encountered a Captain America cosplayer, he decided to stop and take some pictures on Instagram with his arch-nemesis rather than cower or pick a fight. After all, the Red Skull is nothing if not classy….Wait, actually, that’s not true at all. Marquand is classy, but The Red Skull himself is a hideously disfigured Nazi who is always trying to kill people.

In any event, becuase the encounter tickled Marquand’s funny bone, we get to enjoy the sight of the Marvel Cinematic Universe’s (second) Red Skull taking a beat to hang out with the Star-Spangled Avenger on Instagram. You can see it below.

Marquand, who was tapped to play the Captain America villain and replace The First Avenger star Hugo Weaving because of his renowned celebrity impressions, previously said he “honestly” doesn’t know if Red Skull will reappear and made a show of crossing his fingers.

“But on the off chance that that character — I don’t know if he’s out of the MCU, or if he’s free to roam, or whatever — but if he doesn’t come back, I would love to play Moon Knight,” Marquand said.

“Because that’s kind of Marvel’s — he gets compared to Batman a lot, like Marvel’s Batman, but he’s such an amazing character.”

The Walking Dead star, who has long expressed his desire to portray mercenary-turned-costumed crime-fighter Marc Spector and his multiple personalities, said Moon Knight’s struggle with mental illness is a big draw for the character, who has yet to be utilized in Disney-owned Marvel Studios’ expansive continuity.

“And what they go into in a later part of the series with his dissociative identity disorder, he has a hard time keeping realities separate from his crime-fighting or if this is all in his head, and he might actually be going crazy,” he said.

“Which, if you think about it, what superhero wouldn’t kinda be going crazy a little bit if you have an alter ego? I think it would mess with your head. So that’s a character I would love to play.”