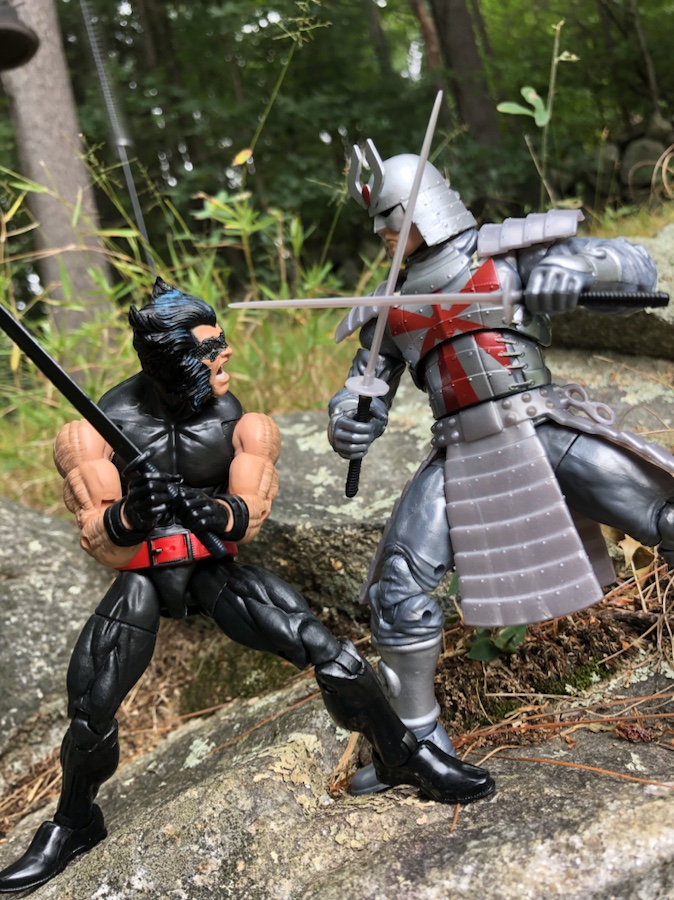 It’s hard to believe it’s only been a few years since the return of X-Men Legends, but already in these few shorts years we’ve seen a vast spectrum of Wolverine Legends variants released including First Appearance, Brown Costume, Jim Lee, Weapon X, Old Man Logan, Days of Future Past, Cowboy and more! Luckily, Wolverine has made thousands of comic book appearances for Hasbro to draw on for inspiration, and they’ve come up with a crazy iteration for their newest figure: Marvel Legends Vintage X-Men Wolverine is one of the more obscure versions ever put up for sale–but to my great surprise, I might be in love with this variant I never asked for… 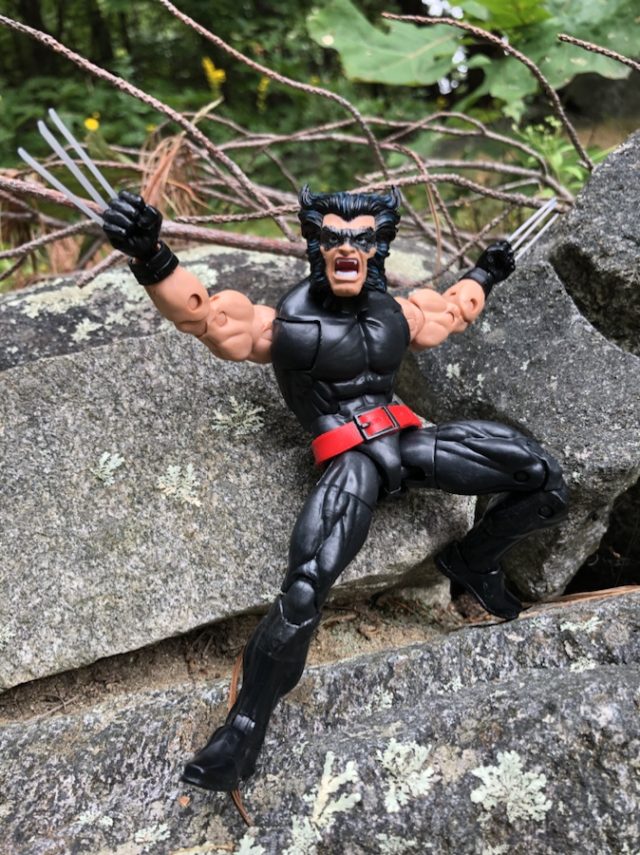 It has literally been close to 30 years since the last time I read the early issues of the original Wolverine comic book series, so when Hasbro revealed this version of the character as part of the Vintage Marvel Legends X-Men series of 6″ figures at New York Toy Fair 2019, it was a major “WTF” moment for me.

I won’t say I ever exactly “warmed up” to the idea of this particular iteration of Wolverine being on my shelf, but I’m a total sucker for this Toybiz Retro packaged series, so in my house he ended up nonetheless. And to my utter astonishment? He is pretty dang groovy. 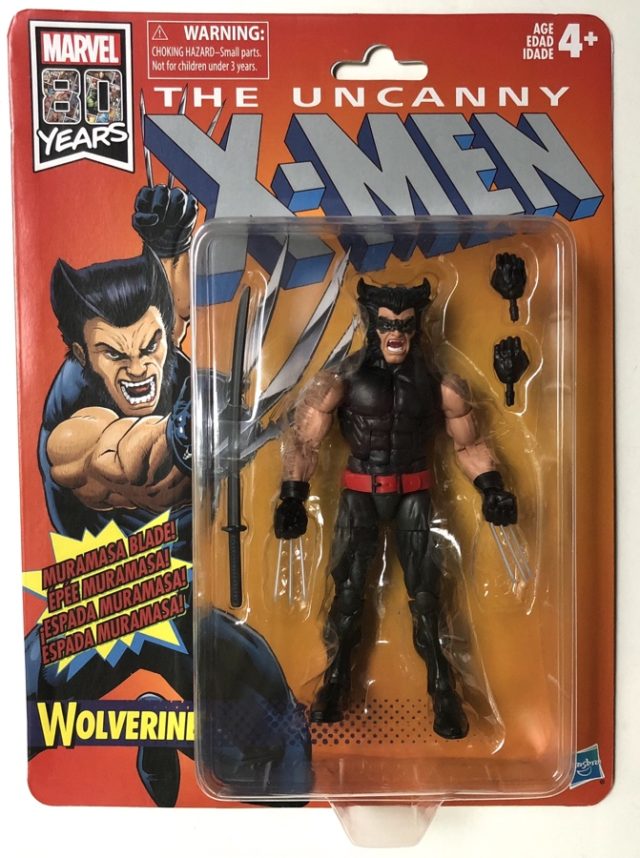 For those who don’t know, back in the 1980s, Wolverine used to get his R&R in his early solo comic appearances hanging out on the (fictional) island of Madripoor (created by the legendary Chris Claremont). While on his X-Men free vacations, he’d bust out a black costume with a strip of blue-black paint as a mask and go fight samurais and ninjas and all other manner of wacky thing. This sounds awful the way I’m telling it, but trust me–this was really good stuff (at least, at the time–I haven’t read it in a “few” years). 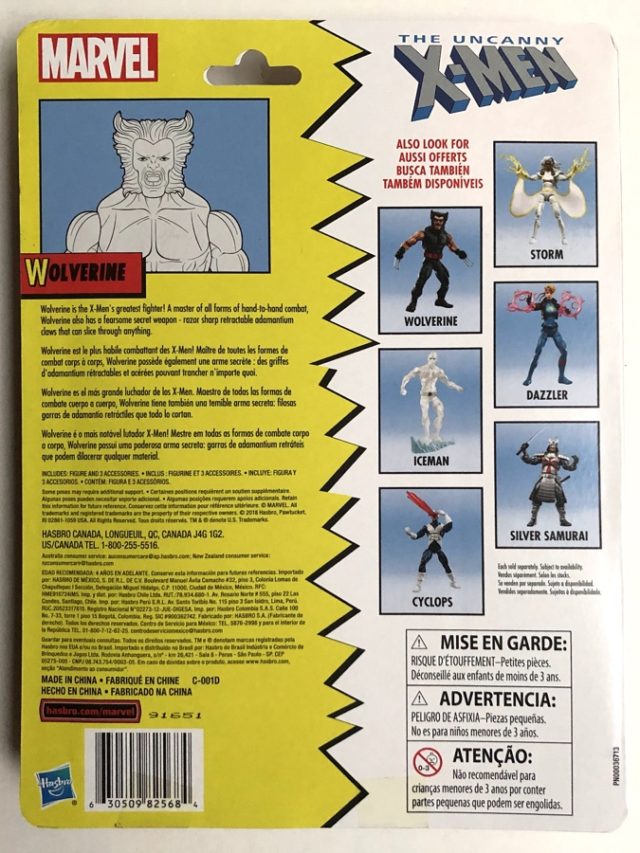 Anyway, despite the fact that this particular Wolverine Madripoor costume has never been released in action figure form before, Hasbro evidently decided that it would pair well with Silver Samurai and fit in nicely as part of the Toybiz-like Retro-Packaged Vintage Series, because here he is! Were they right about him being a worthwhile addition? 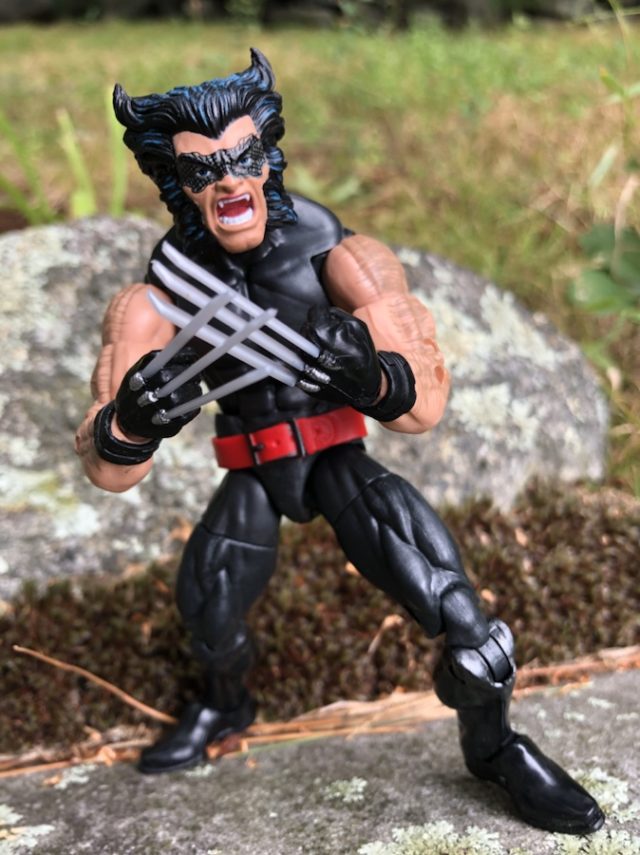 Yeah. Yeah, he is. I was all set to toss this figure into a storage tub up until I actually cracked him off his cardback and discovered that this Vintage Series Wolverine figure rocks. This is one of the more basic-looking costumes that Wolvey has ever worn, but it’s non-flashy and appropriate for the stealthy missions Logan undertakes in Madripoor. I would have preferred a dark black belt, but otherwise Hasbro has nailed the “iconic” look for this (if an obscure costume such as this can have an “iconic” look, anyway). 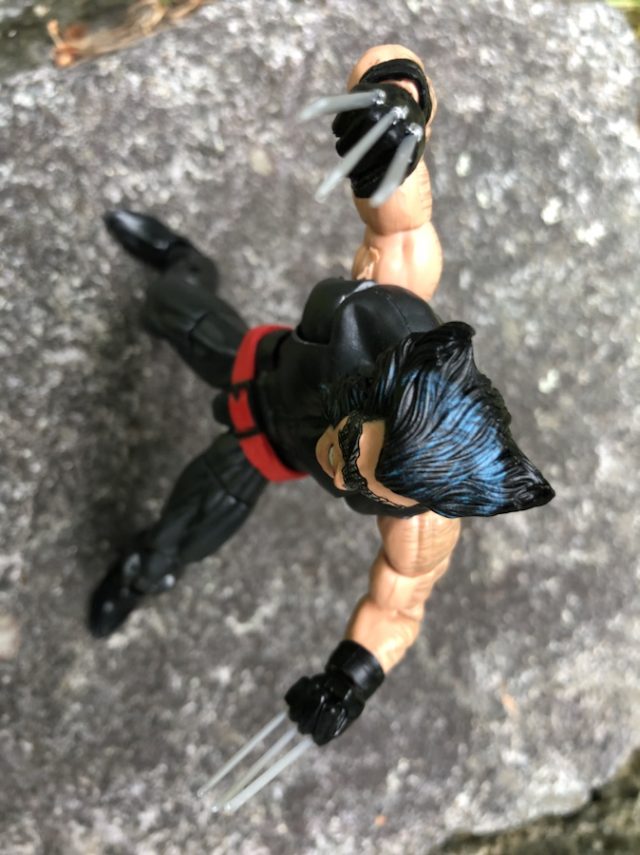 I thought the painted “mask” on this action figure looked stupid when I first saw the prototype at Toy Fair–but after reviewing the source material, it actually matches up and looks pretty swell. The head sculpt itself has a bit of a “classic”/retro feel to it, and the open-mouthed expression fits. This type of “different” portrait for Logan feels refreshing, honestly. And hey–gotta love those classic-feeling blue highlights on the black hair! 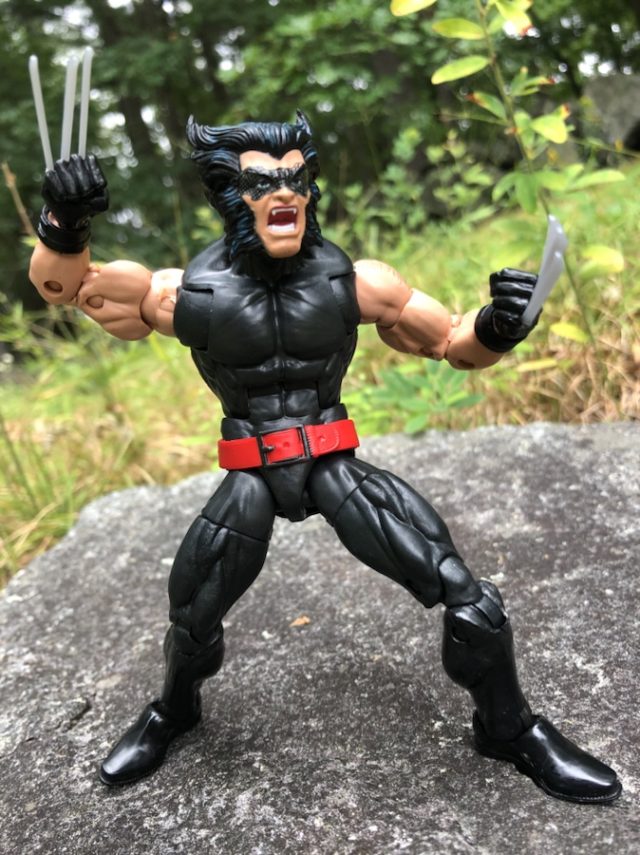 The height and proportions on this Vintage X-Men Wolverine figure are both right-on, and the ever-popular hairy arms paint deco is back again. We both two sets of hands, with both the go-to adamantium claws showing on one set and retracted for the other set of “grasping hands”. What’s Wolvey got to grasp…? The Muramasa blade–which I’m glad to see included, even if I’m not convinced the all-black coloration is quite correct. 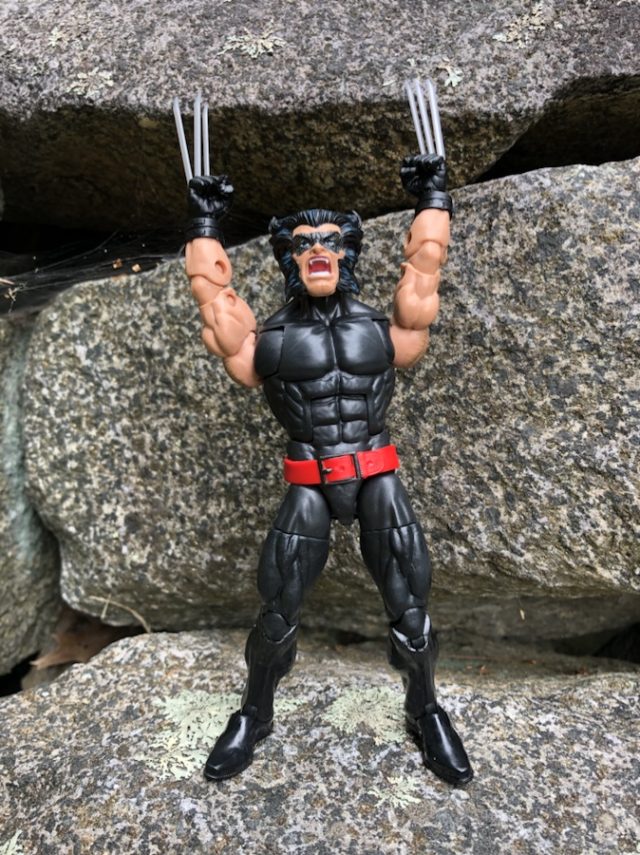 Hasbro continues to impress with the articulation scheme on Wolverine figures with this entry, as he’s got every POA that I would personally ask for in a Wolvey action figure: butterfly swivel ball-hinge shoulders, ball-hinge head, ball hips, swivel waist/thighs/biceps, ab crunch, double-hinge knees and elbows, swivel-hinge wrists and hinged ankles with rockers. 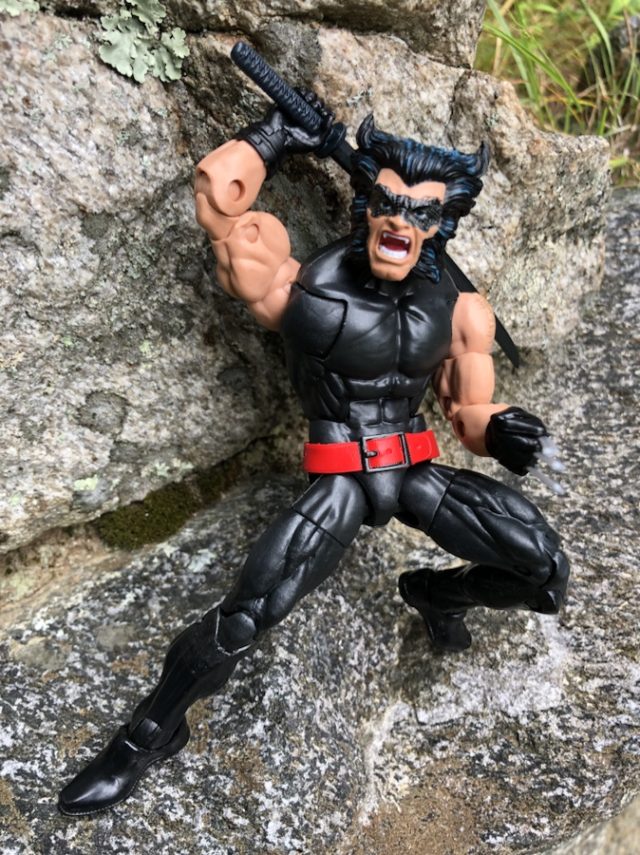 There’s no add-on bits of costume getting in the way of the range of motion, and the butterfly swivels on the arms let this figure wield the Muramasa blade sword with a tremendous amount of free-range movement. I never thought I’d want to play with a clawless Wolverine, but this figure is fun as hell to play with when he’s sword-wielding. Love it! You knew better than me, Hasbro! 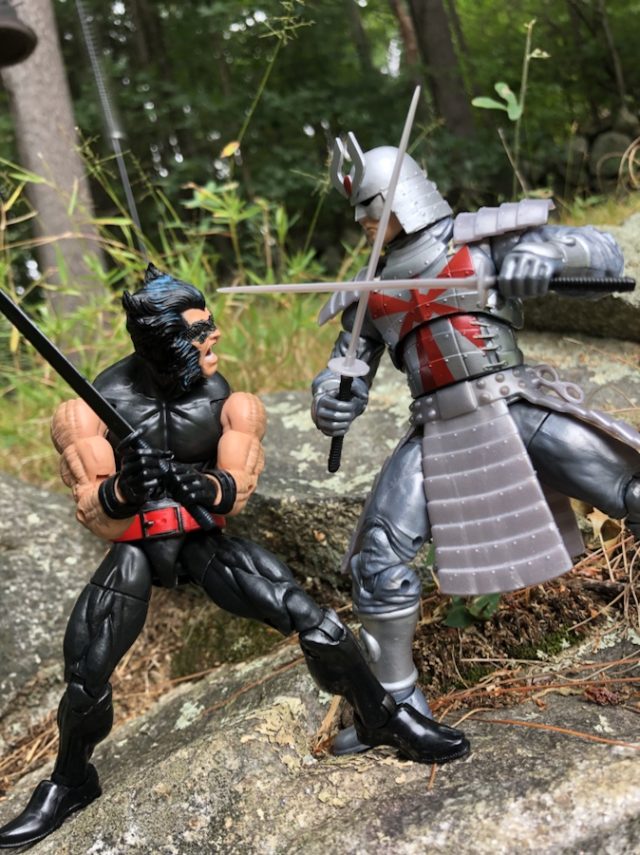 Overall: I was kind of dreading getting this Madripoor Wolverine Marvel Legends Vintage Series figure in the mail, but once I broke him free of his packaging and started playing with him, I fell in love with this thing. Hasbro is bringing their ‘A’-game this year, and this Wolverine is just damn cool–obscure costume that 90% of buyers won’t recognize or no.

The butterfly swivel shoulders let Logan wield the Muramasa blade in a manner that’s superior to anything poor Silver Samurai can pull off, the paint apps are on-point, and the scale and detailing are superb. This is just awesome stuff all-around, with my only complaints being the colors of the sword and belt not being what I’d prefer. I never wanted to own a toy of this version of Wolverine, but now I can stop at one because this version is good enough that I never need another. Excellent.