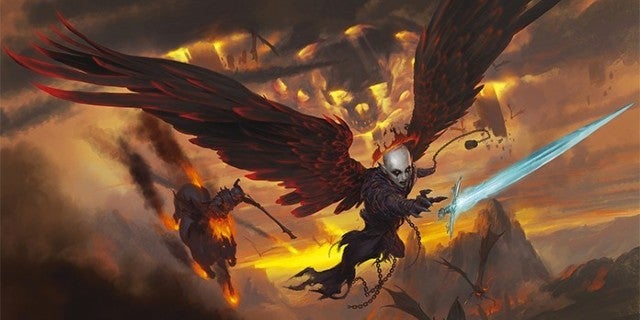 Baldur’s Gate: Descent Into Avernus is an ambitious new adventure unlike any other story made for Dungeons & Dragons Fifth Edition. The new campaign, which takes characters from Level 1 to Level 13, contains a nuanced branching storyline that forces players to make tough decisions that could threaten the immortal souls of their characters. The campaign carefully balances all three pillars of D&D – combat, exploration, and roleplaying – while providing a clear path for players to follow. However, unlike other recent official Dungeons & Dragons, there is lots of room for improvisation and for Dungeon Masters to put their own twist on the adventure. That’s why Baldur’s Gate: Descent Into Avernus feels like the most well-rounded campaign for D&D Fifth Edition to date, a fun and compelling story without any real obvious flaws.

Descent Into Avernus is the second Fifth Edition campaign that isn’t primarily set in the Forgotten Realms, following Curse of Strahd. That works to the story’s benefit, as it gives players a lot more area to explore instead of keeping them tucked away in a specific corner of the Forgotten Realms. The adventure (depending on the choices made by the players) will push players to every corner of Avernus, making infernal bargains and choosing which evil character they’d like to do business with. And while there’s no one in Avernus that can really be trusted, the characters found in Descent Into Avernus are delightfully varied and nuanced. The characters of Descent Into Avernus are some of the best NPCs found in a D&D campaign to date and DMs will love getting to roleplay as these lovable scumbags (and Lulu the Hollyphant, the NPC guide that helps keep the campaign on track.)

I also loved that Descent Into Avernus has a very epic feel to it – which is illustrated by the sheer number of recognizable characters that players will encounter during the adventure. Mordenkainen makes an appearance (as is fitting due to the Planescape-y nature of the adventure) as does Joe Magnaniello’s famed Arkhan the Cruel. Players can also rub elbows with threats like Zariel, Baphomet, Kostchtchie, Tiamat, and Yeenoghu. Players should feel a lot of the same fear that they did while playing through Out of the Abyss, only with a bit more purpose and control over their own actions. Avernus is a terrible place, with amazingly wretched visuals that had me both smiling and grossed out at the same time.

The very nature of Avernus will push players to compromise their character’s morals, as almost everyone in Hell has a corrupting influence. At the start of the campaign, players will be asked to collectively choose a “dark secret” which various NPCs will attempt to exploit or use to gain influence. Players also have to grapple with the use of soul coins, an absolutely delightful invention in which a soul is transformed into a coin and used as currency or fuel for the Mad Max-inspired Infernal War Machines. Driving in a War Machine is a blast, but will the lawful good paladin really be okay with sacrificing someone’s immortal soul to fuel their joyride around Avernus?

Baldur’s Gate: Descent Into Avernus should place high on most players’ rankings of Fifth Edition adventures. The campaign is well-balanced and offers a variety of potential endings, giving players (and DMs) plenty of options as they try to save Elturel. This is probably the strongest Fifth Edition campaign yet and also teases about where Dungeons & Dragons could be heading should it ever start moving beyond the Forgotten Realms.