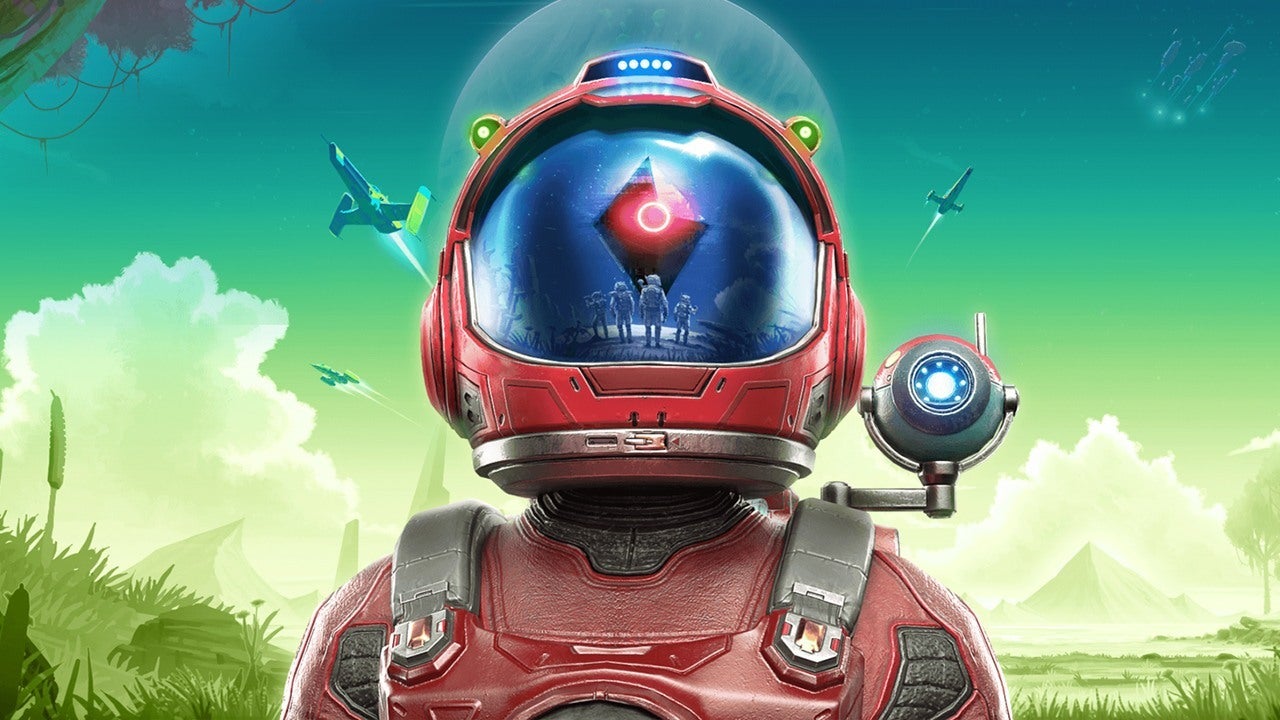 is the water fight of games. When your water balloons are stacked high and your water gun is full it’s an absolute blast. But inevitably, you run out of liquid ammunition and have to pause for several minutes, soaking wet and shivering, while you operate a hose and refill your stores for the next round of fun. While the recent Beyond represents another significant step in the right direction for No Man’s Sky that improves itself in almost every area, the uninteresting harvesting and survival mechanics that underlie it all remain incredibly grindy and frequently mind-numbingly tedious. It often feels like it’s been made by two teams with opposing views on game design, who are each tugging at either side of it until eventually agreeing to meet in the middle or tear it in half.At its best, No Man’s Sky plays like an increasingly elaborate interstellar Animal Crossing. You travel the stars and visit strange, procedurally generated planets in a never-ending quest for loot and money to spend on upgrades for your survival suit and weapon, ships to pilot, rovers to drive, and bases to build. Every time you think you’ll log off for the night, another notification pops up that reminds you about that one last thing you really wanted to do, and before you can say “I need an intervention,” it’s 5 AM and you’re redecorating your fifth base on some remote world or taming a bizarre creature that looks like the lovechild of Big Bird and an octopus.

It’s easy to appreciate the improvements and additions included in the Beyond update because they’re apparent as soon as you boot it up. Improved graphics highlight things like detail on your ships and a revamped tutorial and mission guidance system makes it much more clear what you should be working toward at any given time. Unlocking new technologies has been reimagined as skill trees that are easy to understand. And these are just a few of the highlights on the massive laundry list of things in the Beyond update that make No Man’s Sky vastly more interesting than it’s ever been.

With Beyond, No Man’s Sky is vastly more interesting than it’s ever been.

But the same things that make playing No Man’s Sky a wonderful, habit-forming odyssey that would make Tom Nook proud often work against you — like when you find yourself repeatedly grinding the same materials and crafting the same parts over and over again in an ongoing effort to fuel the numerous engines of interstellar life. You’ll spend tedious hours mining rocks to craft metal plates that you need to make starship engine fuel just so you can take off in your ship and see the still-impressive, completely seamless transition from ground to outer space and back again. And even though No Man’s Sky’s carrying limitations have been even further loosened with the Beyond update your inventory still fills up almost constantly, ensuring that the grind will never be defeated. With few ways to automate resource gathering, exploring the cosmos often takes a back seat to waiting for your mining laser to melt a tree into resources for minutes at a time.

And, considering how central exploration is to No Man’s Sky’s appeal, it’s staggering just how many mechanics still seem dead set on preventing you from doing just that. Why are your sprint and jetpack capabilities meters so limited, and why does using them draw from your life support meter? Why does every language have to be learned one word at a time, meaning that even after dozens of hours of playing you still can’t really understand any of the alien races you encounter? Why, for the love of God, does every planet in the universe have violent weather events every couple of minutes that require you to shut yourself indoors or hide in a cave and wait out to survive? Time and time again, No Man Sky begs you to explore it but then (quite literally) forces you walk, not run.

Hello Games’ Sean Murray walks us through Beyond’s many improvements in the video below.

It’s odd that No Man’s Sky still has so many irritating elements, because it’s also very clearly aware that they exist and tries to smooth over the issues rather than simply fixing them. For example, combat remains as dull and repetitive as ever, so the appearance of hostile lifeforms and robotic sentinel space police has been reduced instead of trying to make fighting them more entertaining. Space dogfights also remain monotonous and overly simplistic in Beyond, and while controls seem to have improved and encounters don’t drag on as long, fighting off pirates is never more than an annoying interruption to your travels.

Beyond brings NMS dangerously close to what we all thought it was when it was first revealed.

And yet, there’s something truly special about No Man’s Sky after the Beyond update that brings it dangerously close to being what we all thought it was when it was first revealed years ago. Getting lost among the stars, seeing strange and unique creatures, and claiming a piece of the nigh-limitless galaxy for yourself by building a home are all rewarding and all but completely unique to No Man’s Sky. It’s hard not to fall in love with it in the brief pockets of time where it isn’t forcing you to beat your head against a wall for an hour while you search for a deposit of copper but the stupid Dr. Seuss planet you’re on has is uranium.

In the course of my travels, I found myself stranded on a massive water planet filled with aggressive jellyfish, stared in awe at some bizarre life forms that were made up of levitating crystals, and explored the murky caves on an atmosphere-free moon. Of course, regardless of how they look every planet still has an identical loop of gathering materials, hiding from inevitable and frustrating storms of heat or ice or toxins, and maybe building a base or riding an animal or two along the way. But still there’s an undeniable rush of excitement in discovering and exploring a planet for the first time that doesn’t go away even after hours of play.

Beyond also alters and consolidates No Man’s Sky’s three main storylines into a more cohesive set of quests that intertwine, and they are much more accessible for it. One of the best-kept secrets of No Man’s Sky is that the story is actually fairly complex, with twists and turns that even go so far as to explain the reason behind the universe’s existence. But frankly, the vehicle by which the story is told – an endless chain of fetch quests and vague conversations with generic NPCs – makes the whole thing not at all worth the effort. Your time is better spent doing the things that are entertaining to you, finding your way to the end of the main quest lines only if you manage to find joy in doing so. (Or, y’know, YouTube exists.)

No Man’s Sky Beyond Screenshots

Multiplayer features have been drastically improved with Beyond, though it still falls far short of today’s standards in many ways – especially where organization is concerned. The Anomaly space station is now a social hub that allows you to encounter other players organically rather than by invite or chance (though doing so is still quite rare), and together you can undertake short group missions via The Nexus or even visit one another’s bases by stepping through a massive teleporter. The number of players in a single instance has been bumped up from four to eight on consoles and up to 32 on PC, but actually organizing activities together can be a bit of a nightmare. For starters, you’re given very few tools to find one another in the expansive galaxy, and unless everyone is communicating and staying together it’s easy to get lost or left behind with no easy way to rejoin your friends. If you find yourself without the required materials to launch or pilot your ship when everybody else takes off, for example, you’ll either get left behind by your friends or will hold up the group while you go shoot a laser at some plants for a few minutes. Sharing resources with one another is still, sadly and inexplicably, not an option.

Sharing resources with one another is still, sadly and inexplicably, not an option.

Most of the major and strange multiplayer glitches from last year’s NEXT update (in hindsight, a very funny name now that it’s the previous one) have been ironed out, though you’ll probably still encounter the odd bug now and again. I had incidents where my partner couldn’t see the enemies attacking me, or animation issues making it unclear when one of us was firing our mining laser. Playing with others makes the grind of No Man’s Sky much more bearable, but oftentimes because having someone to share in your pain can be really cathartic.

VR makes its debut in No Man’s Sky with the Beyond update (on PlayStation VR and PC, at least), and wandering around an undiscovered planet and hearing unknown critters walk up behind you is an exciting and sometimes unnerving experience. Using hand tracking with Move wands or Oculus/Vive/Index/etc controllers to aim your weapons and tools feels natural, even if you’re still just engaging in the usual monotony of harvesting. Using VR in space flight, on the other hand, is an overwhelmingly positive experience which benefits from your character being stationary and blurriness not mattering quite as much in the darkness of the void. And while it doesn’t fix the monotony of dogfighting, it absolutely makes it more immersive because you can look up through your ship’s canopy.

Watch 10 minutes of No Man’s Sky in VR below.

Movement options offer a static mode with teleportation and click-turning that can be a bit hard to learn but is easy on those of us with weaker stomachs, or a smooth-movement mode that acts the same way the non-VR mode does. However, on the PlayStation VR it was so low-res and blurry that it might make you lose your lunch like it did mine… twice. Still, seeing the galaxy of No Man’s Sky from a true first-person perspective can be a breathtaking experience, even if technical limitations mean there’s still a long way to go before it makes us feel like we’re really there.