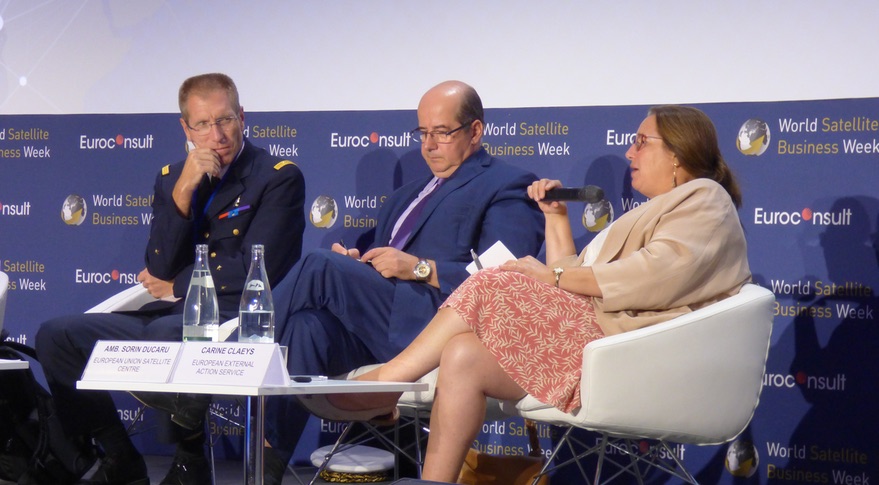 PARIS — The European Union’s equivalent of a foreign ministry is starting a new effort to promote the need for sustainable space operations, but that effort will not initially include any new regulation of European satellite operators.

Carine Claeys, special envoy for space and head of the Space Task Force for the European External Action Service, said in a Sept. 13 panel discussion at Euroconsult’s World Satellite Business Week that the Safety, Security and Sustainability of Outer Space (3SOS) public diplomacy initiative will promote “ethical conduct” in space amid concerns about orbital debris.

The acronym, she noted, has a second meaning. “It is also three times SOS,” she said, “to create the case and a sense of urgency.”

The 3SOS effort is prompted by the belief that low Earth orbits in particular are becoming increasingly crowded with satellites and debris, a situation that will be exacerbated by the deployment of megaconstellations. “Is this all sustainable and responsible?” she said. “I’m afraid not, without safeguards.”

While the 3SOS is intended to be a “call for responsible behavior” in space, the details about the initiative remain vague. Claeys called for some degree of space traffic management to avoid collisions, including placing transponders of some kind on satellites to better locate and identify them. That effort could include sharing of space situational awareness data and an “obligation” for satellites to deorbit themselves at the end of their lives.

“I hope that we will be able to reach a common understanding of all space actors in all parts of the world on responsible and sustainable behavior,” she said. “This would then allow traditional diplomats to progress.”

For now, 3SOS will focus on discussions, including with industry, space agencies and think tanks, to build a common understanding of the issue and potential solutions. That includes a workshop on the issue in Brussels in December. “I think that is the way forward for building that common understanding of reasonable behavior,” she said. That would build on existing efforts, like the 21 space sustainability guidelines approved by the United Nations’ Committee on the Peaceful Uses of Outer Space (COPUOS) in June.

That effort, though, doesn’t include imposing new regulations on satellite operators based in EU nations, out of concerns that such rules could put those companies at a competitive disadvantage.

“There are things that can be done at the European level, but I don’t think that the best way to go forward is to have compulsory measures at a national or supranational level,” she said. “I think that good behavior and common understanding, to be applied at the world level, is the only way to preserve a level playing field for competition.”

Harry Styles to Perform at 2023 Grammys
King of the Hill Revival Announced at Hulu
New Marvel Legends Reveals
James Cromwell Gets Emotional While Talking About How He Came Up With His Famous ‘That’ll Do, Pig’ Line In Babe
Knock At The Cabin Reviews Are Here, See What Critics Are Saying About M. Night Shyamalan’s New Thriller