In the story of our species, Africa is known as the cradle of humanity. Somewhere on this vast continent, hundreds of thousands of years ago, a group of early humans is thought to have diverged from the others, ultimately spreading across Africa and the rest of the world.

These were the first ancestors of modern humans, but the thing is, no one knows who they were or in what region they were located. At the time, there were several human species living in Africa, and what we currently know about these early humans comes almost exclusively from fossils, which are rare and fragmented.

For years, scientists have hotly debated which early humans were related to us and which simply died out on a parallel evolutionary branch.

Instead of waiting for a new specimen to clear things up, scientists have now taken a stab at re-creating a fossil not yet found, the oldest of all Homo sapiens, an elusive ancestor that might have lived in Africa some 300,000 years ago.

Using computers and mathematical techniques, the team has virtually rendered a skull with surprisingly slender and modern features. The high forehead, flat face and a rounded skull are reminiscent of living humans, the authors say, while the projected brow-ridge and wide-set eyes are more similar to archaic hominins.

It’s true such a skull may have never existed. But the authors say it’s a tentative prediction of what the last common ancestor of modern humans might have looked like.

The model is based on a range of data: the analysis of several extinct human relatives from the Late Middle Pleistocene (LMP), including Neanderthals; CT scans from the skulls of 260 people from all over the world; and a set of early modern skulls from Israel, dating back 100,000 years.

Organising these skulls into an evolutionary tree, the researchers noticed not one, but three different populations of early humans living in Africa during the LMP.

A fossil from Morocco represented one population, while another in Tanzania showed different features. Two more fossils from East Africa and one from South Africa revealed a third population, and it was this group that most closely resembled the new virtually-reconstructed skull.

As such, the authors speculate that the earliest common ancestor of modern humans might have arisen from inter-mixing between the South- and East-African populations. Meanwhile, the North-African populations probably interacted with Neanderthals during this time.

In other words, the ‘cradle’ of civilisation might not be confined to one simple spot; our origin story might be more diverse and complex than all that.

“Our results support a complex process for the evolution of H. sapiens, with the recognition of different, geographically localised, populations and lineages in Africa – not all of which contributed to our species’ origin,” the authors conclude. 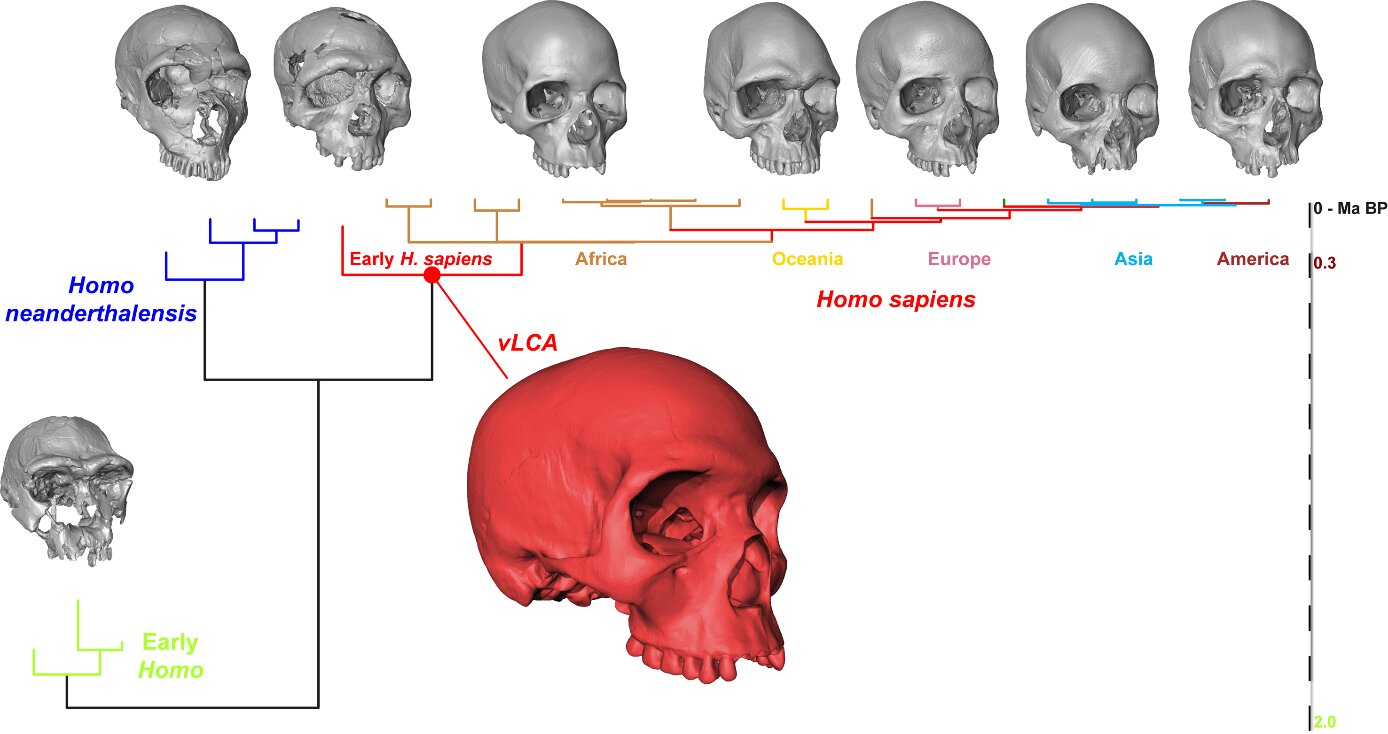 Under this scenario, the team proposes that the emergence of modern humans might have occurred in two stages.

First, a period of diversification, pre-dating H. sapiens, where different populations of early humans arise, each with different features. And then, a second phase of fragmentation and expansion, where populations interacted and united into new groups.

“Nevertheless,” the authors explain, “our results suggest that it is unlikely that all LMP local populations would have contributed equally, or at all, to the lineage that gave rise to the population ancestral to H. sapiens; local extinctions and founder effects would have shaped considerably the emergence of anatomically modern humans.”

In recent years, more scientists have been arguing that the history of modern humans is not as linear or simplistic as we once thought. If a skull like the one modelled by this team actually existed in real life, it could undermine some of the more textbook ideas we have about the origins of modern humanity.

Paleoanthropologist Katerina Harvati, who was not involved in the new study, told The New York Times that this new tool was “a really great way to test hypotheses about the fossil record.”

Still, she says we’d need to be cautious about conclusions we draw from these models, and she would like to see more modern humans, other than the Israel skulls, added to the mix.

The findings were published in Nature Communications.

Jay-Z & Yo Gotti Dismiss Mississippi State Penitentiary Lawsuit
Forza Motorsport built to take “full advantage” of Xbox Series X/S
It Cracks Anna Kendrick Up How Twilight Stars Went From Heartthrobs To ‘The Butt Of Every Joke’
Twitter Users Are Just Finding Out The Plot Of Tom Brady’s 80 For Brady Movie, And They Have A Lot Of Thoughts
Amazon Studios Returns To Wide Theatrical With Ben Affleck & Matt Damon Nike Movie ‘Air’ In Spring