Patreon, the platform for independent content creators to operate membership businesses for their core fans, announced it is selling the assets of Kit.com to localized affiliate link service GeniusLink.

Founded in 2015, Kit is a social-shopping platform where influencers curate bundles of products (“kits”) they recommend. When their fans buy products they featured in a kit, the influencer earns an affiliate fee commission. Kit has 2.3 million monthly web visitors, according to SimilarWeb. 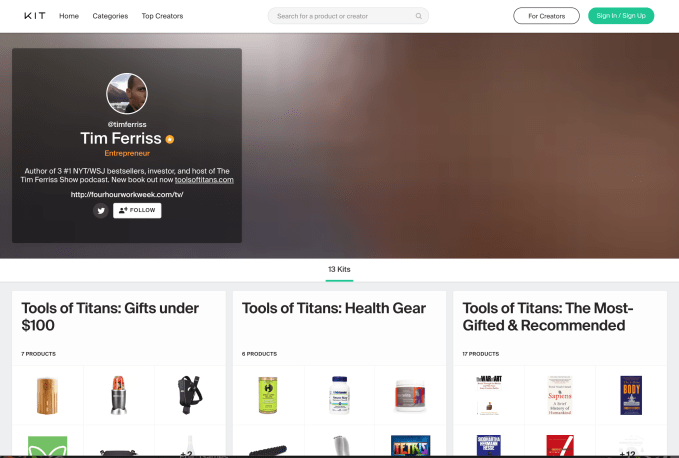 Patreon acquired Kit in June 2018 in what Patreon’s SVP Product Wyatt Jenkins described to me during my in-depth series on the company as “close to an acqui-hire,” adding that “although Kit is a good revenue source for a lot of creators — so it’s not a shut-down of Kit — we’re maintaining it but not iterating on it.”

Kit had previously raised $2.5 million in venture capital from backers like Social Capital, #Angels, Precursor Ventures, Expa, and Ellen Pao. While the Kit site remained active, the team behind it was reassigned to lead product development for Patreon’s merch offering.

It is unsurprising that Patreon found a new home for the asset. While Kit is a tool for creators to monetize, it doesn’t enhance paid memberships for fans and that’s Patreon’s exclusive focus right now. Even Patreon’s merch product is only for offering merch as a benefit for membership tiers, not for managing an e-commerce store with one-time transactions.

In a blog post today announcing the acquisition, GeniusLink wrote that “The first order of business for Geniuslink is to migrate Kit to the Geniuslink infrastructure and work to improve speed and reliability while our operations team dives into user support. We look forward to adding additional functionality for creators to monetize their kits in the coming months.”

GeniusLink launched in 2009, originally branded as GeoRiot. The bootstrapped company has 13 employees headquartered in Seattle.

Social commerce is a popular trend right now, with other social platforms testing e-commerce integrations for users (particularly influencers) to feature products. YouTube now has a built-in merch section for a creator to sell products under their videos and Instagram lets influencers sell products directly in the app. These have the advantage of providing influencer-curated shopping experiences right where influencers and their fans already are.

Those features assume an influencer is selling their own products, however, or at least the products of a brand they’ve formally partnered with. For Kit and its affiliate link model, the focus is on influencers as trusted curators for their fans. The influencer can feature a much wider variety of products and do so immediately, without negotiating a deal with each brand.

That’s also why the model likely doesn’t make sense for many popular influencers — they want more money for their endorsement of a product than a standard affiliate link fee, and recommending lots of products they don’t have formal deals to promote may undercut them in their negotiations with brands.

As GeniusLink adds more monetization features to Kit, perhaps it will make it a more lucrative business activity for small and large influencers alike.