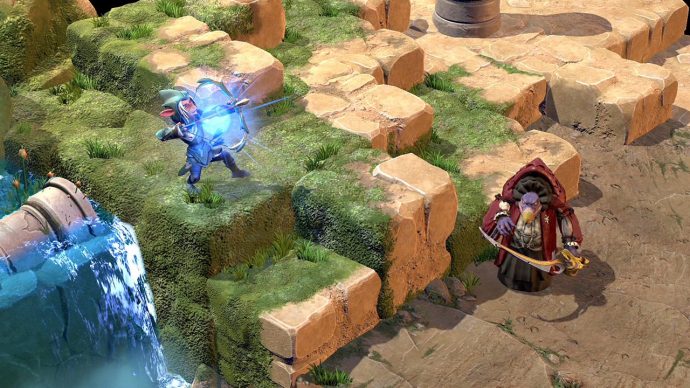 Lately I find myself listening to a lot of the same music I listened to growing up in the early 90s. I don’t know if it has to do with getting older – I’m turning 32 next week so naturally I’m growing more aware of my inevitable and impending death. Sometimes I wonder whether I’m just trying cocoon myself in the gentle safety of 90s memorabilia instead of having to deal with reality.

Lucky for BonusXP and En Masse Entertainment, that is a can of worms I dare not open. And while I’m stuck here waiting for the nostalgia-infused The Dark Crystal: Age of Resistance Tactics to hit, at least there’s a nice little gameplay trailer to whet my appetite.

We already knew all about its turn-based SRPG mechanics thanks to the Final Fantasy Tactics-like E3 reveal trailer – and what with it being called Tactics and all. However, in the “Allies and Adversaries” trailer, we get a proper look at combat and how the development team recreated major characters the Netflix show: Chamberlain, Aughra, and Deet.

The video also dives in to the abilities and playstyle of my beloved Gelfling – basically Jim Henson hobbits, if you never watched the spectacular 1982 film – whose units can be customized for specific types of combat. Players can beef them up with new gear, upgradeable abilities, and an extensive job system which you can spot briefly in the vid. Each battle is said to be dynamic, so they’re aiming for replayability. Interestingly, the game will also feature a New Game Plus mode with higher difficulty settings.

The Dark Crystal: Age Of Resistance Tactics launches later this year, although no firm date has been announced. The new Netflix series started last month on August 30. You can read a little more on its official page here, and its Steam store page.