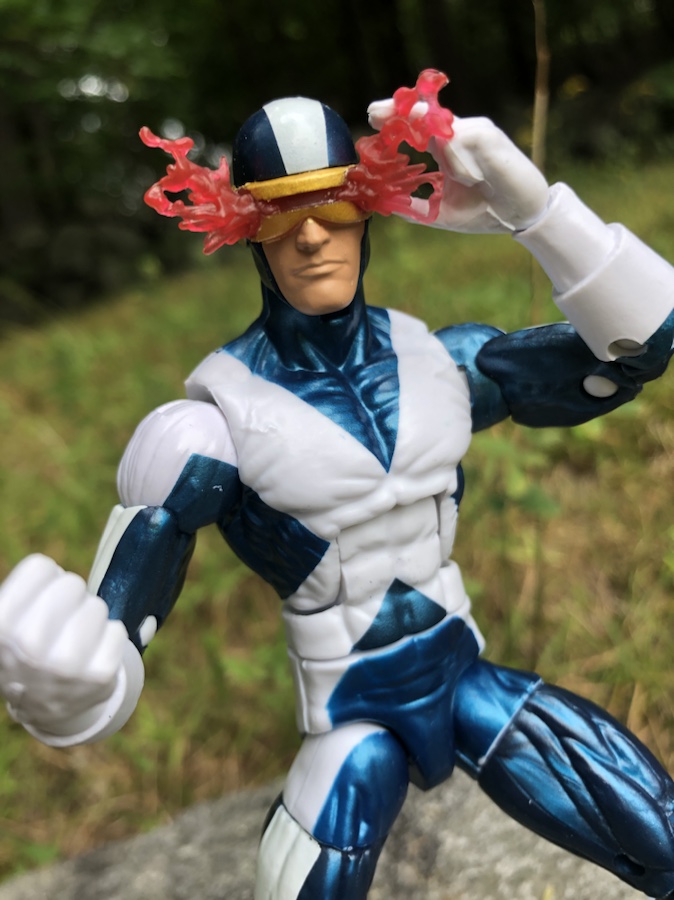 Even though Hasbro has released quite a few super-articulated figures of Cyclops over the past few years (with costumes spanning the Silver Age to Jim Lee to Marvel NOW), there’s always a big demand for versions of the most iconic leader of the X-Men. So I was rather surprised today to see that the Vintage X-Men Legends Cyclops figure is both readily available and discounted to 15 bucks shipped online. Deciding this warranted investigation, I chose this Marvel Legends Cyclops as the subject of today’s review… 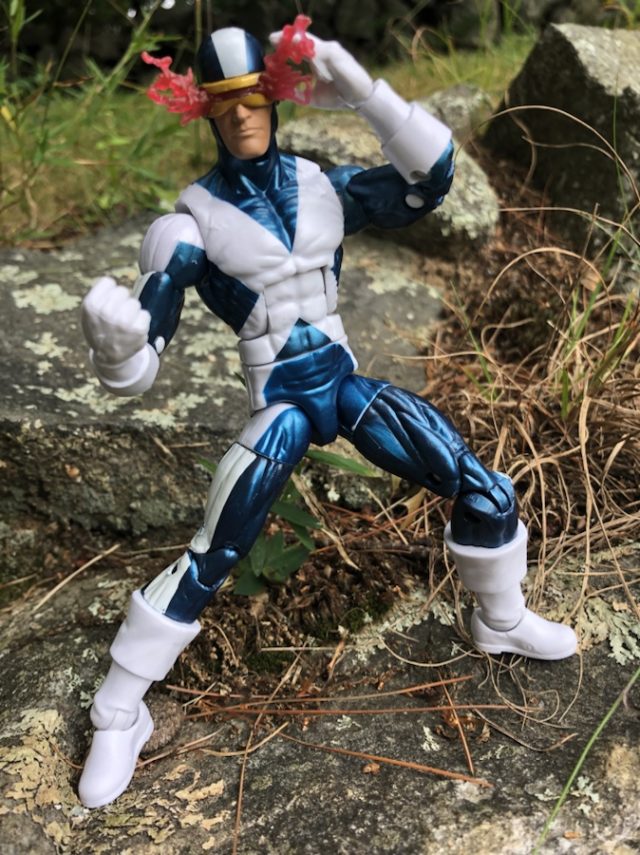 When I was a kid, I somehow managed to save up 20 dollars to purchase a bagged and boarded X-Factor #1 comic book from a local store. While I couldn’t tell you what that comic book is about anymore (I think future New Mutants member Rusty debuted), I do remember that that’s still the most that I’ve ever spent on a single issue of a comic book in my entire life. And this is the costume Cyclops wore in that comic book.

And the very first X-Men toy I ever bought as a kid? Yup—that was also X-Factor Cyclops (the first toy produced of the character by any company) in the 1991 Toybiz X-Men line. 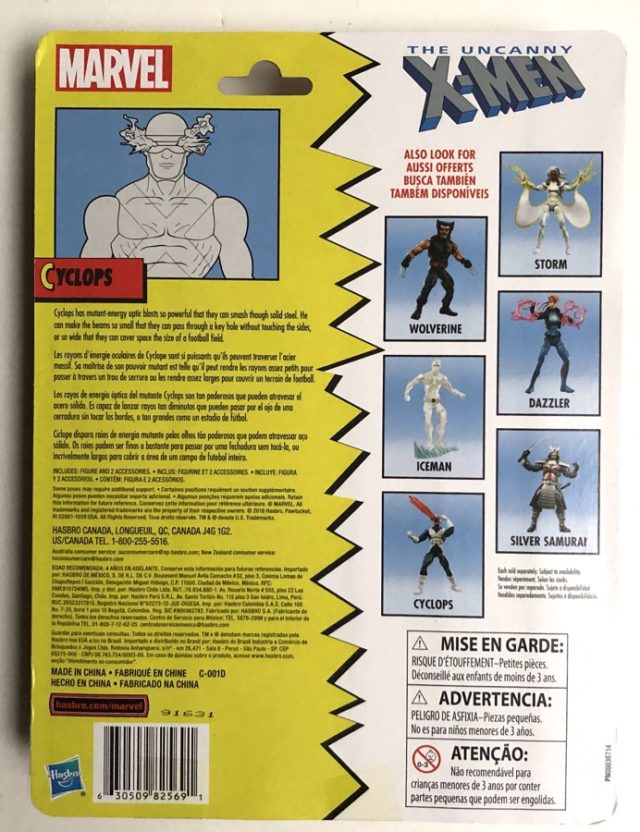 So does this particular iteration of Cyke hit all the right sentimental notes in its retro packaging to make me love it right out of the gate…? Yup! But let’s see if the toy itself is any good… 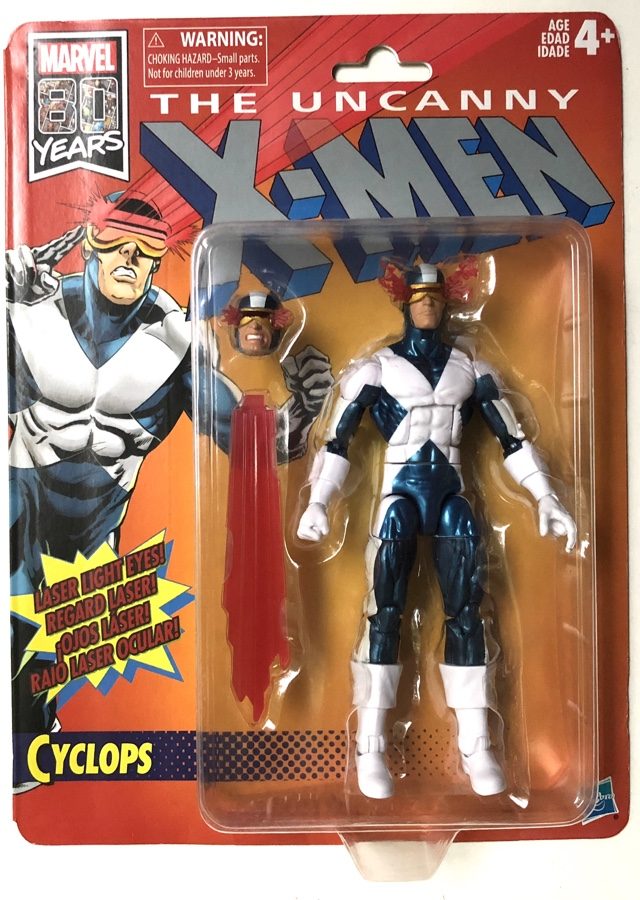 It pained me a bit to rip apart the throwback Toybiz packaging for this figure since the original 1991 version is so important to me, but at my age (and collection size), there just ain’t room for superfluous packaging in my life. Sorry, awesome oversized Toybiz-styled cardback! 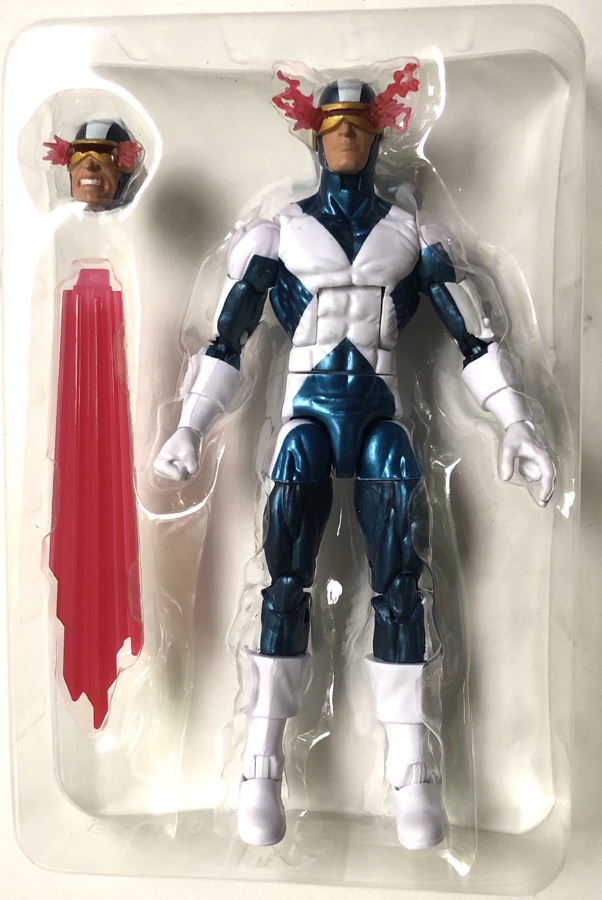 Upon releasing this Scott Summers from his plastic purgatory, I instantly knew I was going to like this action figure just by looking at him. The blue and white paint apps are sharply painted, and the matte white and metallic blue colors complement each other beautifully. This is one slick looking Cyclops figure. 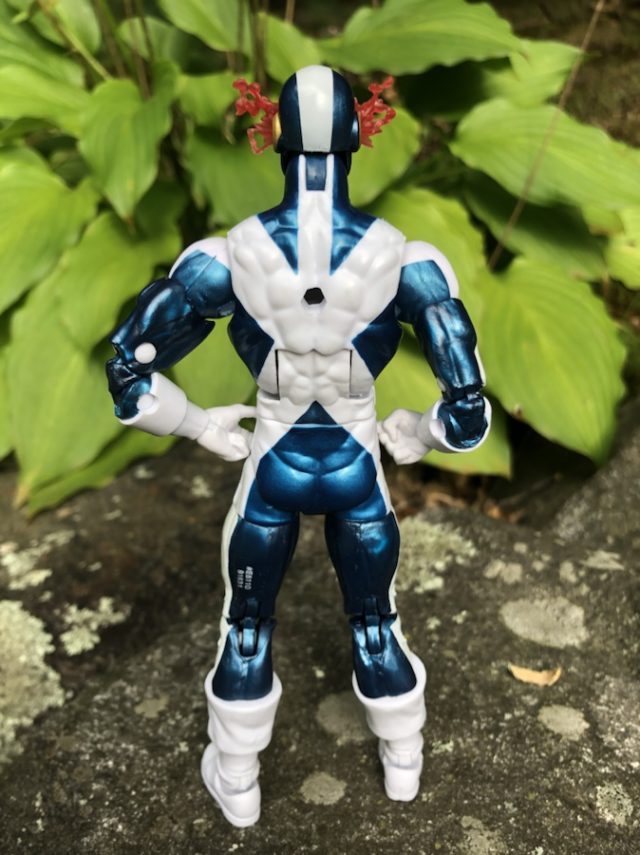 There are thankfully no loose or wiggly add-on bits of costume for this figure, which I am overjoyed about—the add-on portions of the Warlock Series Cyclops in Jim Lee costume really hurt my enjoyment of that particular toy. X-Factor Cyclops’ costume doesn’t necessitate any extras like that, and I am a happier man because of it. 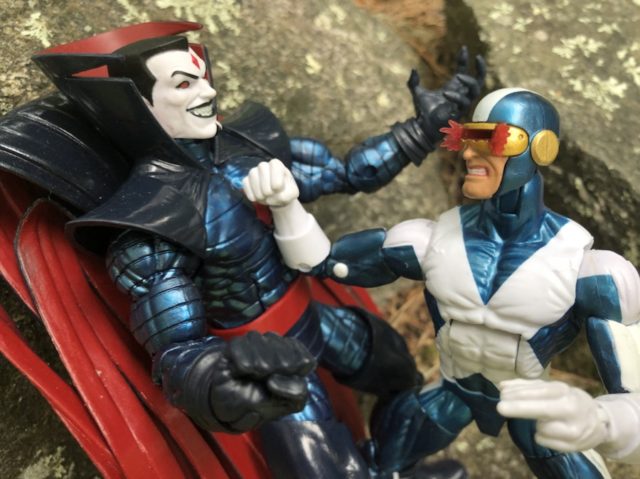 We get two all-new Cyclops portraits with this figure, and both of them are complete winners. The serious, stone-faced Cyclops is the iconic expression for the character in my mind; while we also get an enraged head sculpt for full blast action. And speaking of which… 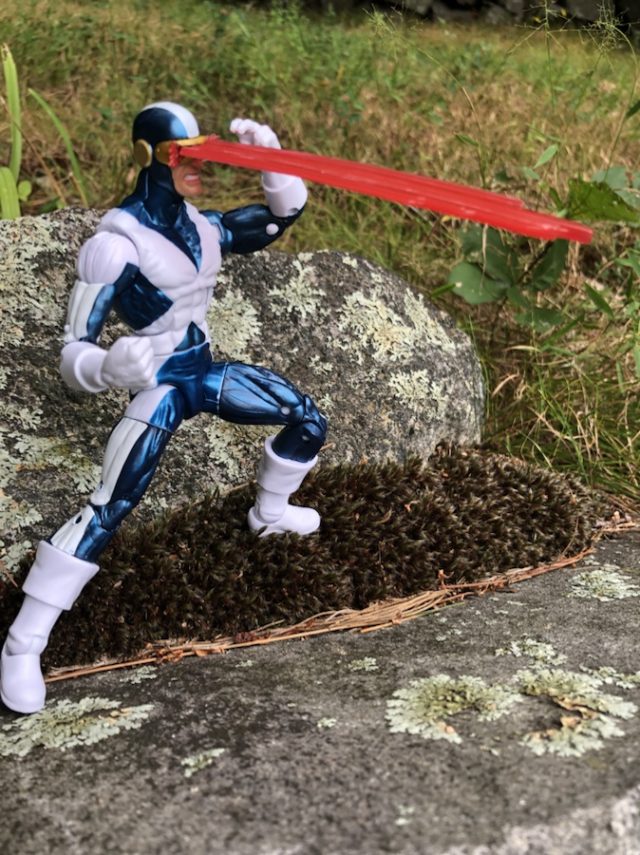 For the first time ever, Hasbro has given us a clip-on optic blast effects piece! Holy crap! This translucent red strip of plastic is nicely-sculpted and attached snugly to the angry portrait, adding an unprecedented flair to an X-Men Legends Cyclops version! 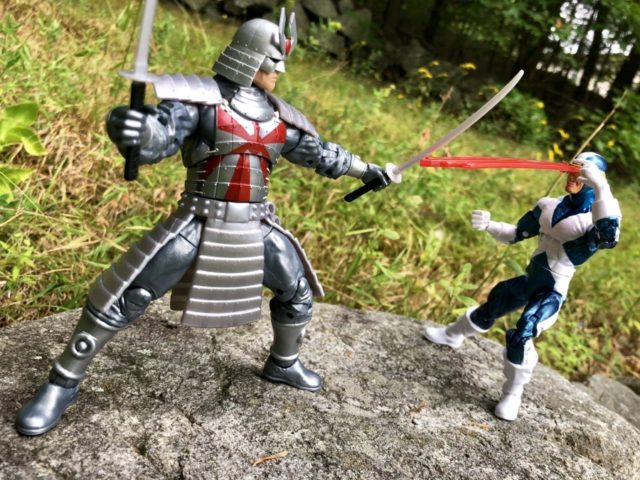 Not only that, but both heads have some translucent red energy sculpted bubbling on the sides of Cyke’s visors. This adds loads of personality and really makes this stand out from previous iterations Hasbro has done. Seriously, this is good shit—I feel like Hasbro has really turned a corner with this release. 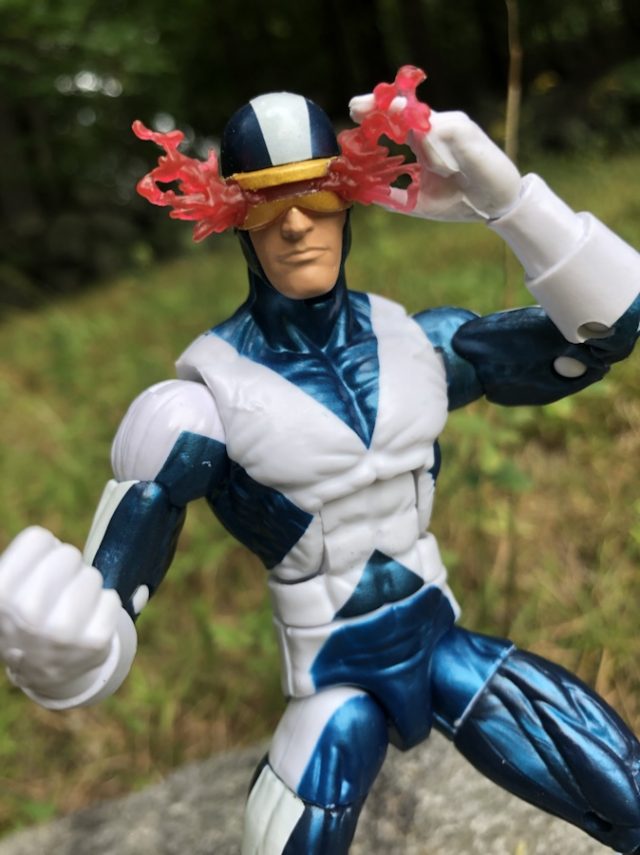 The only issue I had with my heads is that both of them have gold paint from the visor exterior leaking into the red inner part of the visor, which looks a bit clumsy and unkempt up-close (although this is totally unnoticeable at a distance). Even so, these are some of the best Cyclops heads ever, in my opinion. 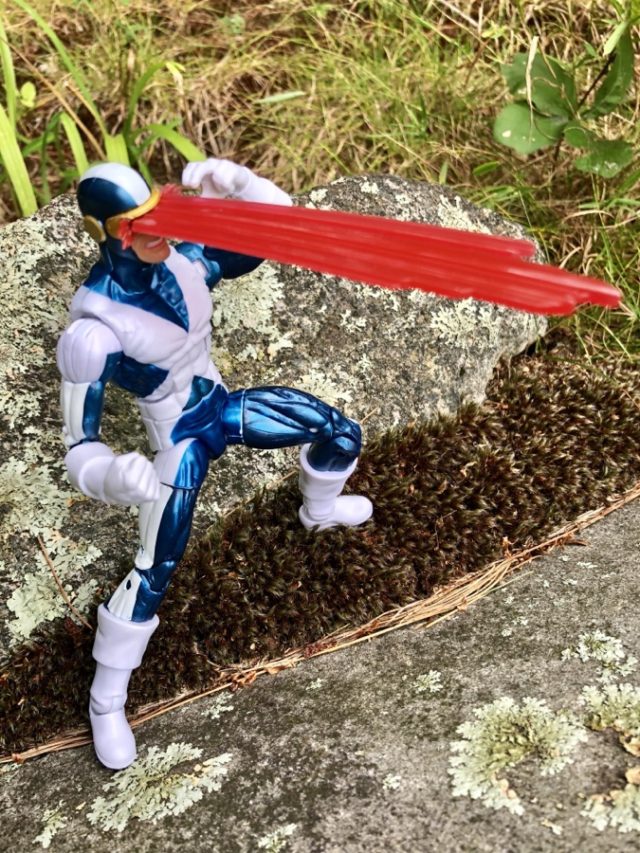 And on the articulation front, it’s the usual high standards that we’re all accustomed to and spoiled by: 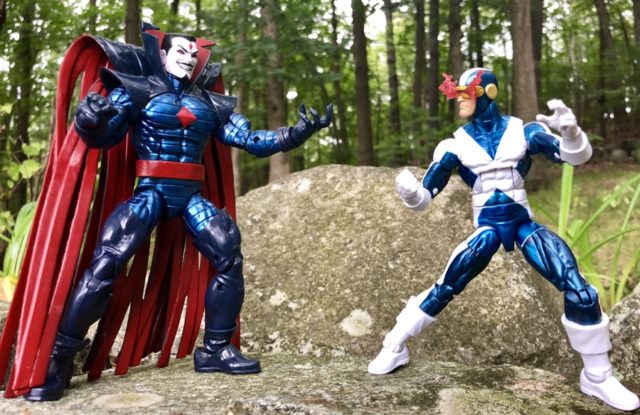 Overall: Although the paint apps in my visors were somewhat messy and I think this figure could have benefitted somewhat from butterfly swivel shoulders, this is otherwise an exceptional Cyclops Legends figure that I feel is only not a top seller because of fans’ unfamiliarity with this outfit.

This is a classic X-Factor costume I love, brought to life nearly perfectly. Both heads capture Scott Summers’ personality spot-on, and the optic blast effect is a treat. While this release may be overshadowed a bit by the Jim Lee Storm in this series, it’s easily my favorite Marvel Legends Cyclops Figure ever releases. Love this—awesome stuff.