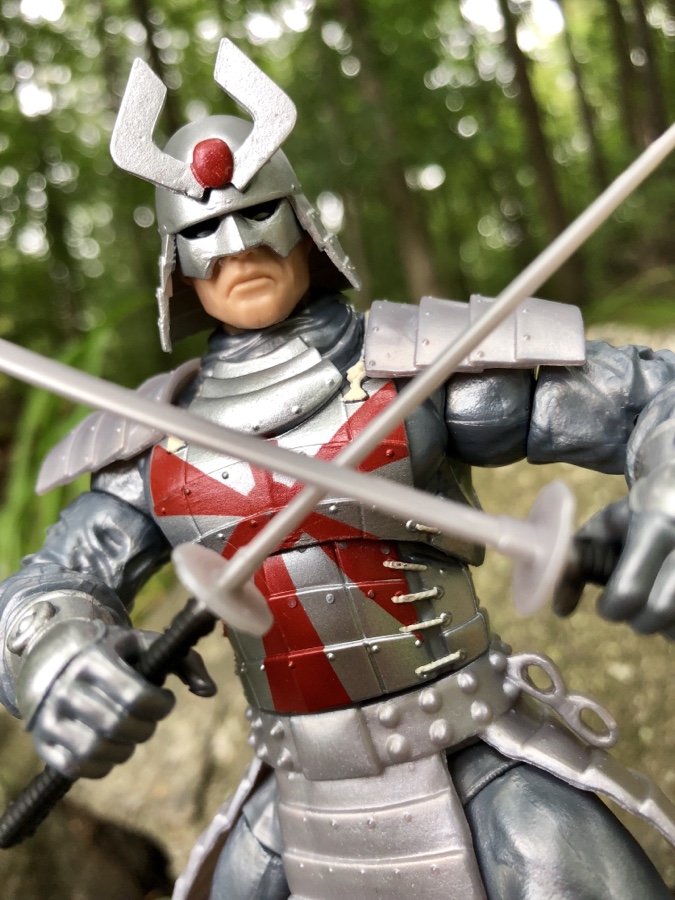 The consequence of getting an explosive number of Marvel Legends reveals at the major conventions each year is that we tend to fall into news droughts between shows. And so, with a month to go until NYCC 2019, there’s not much fresh news to talk about—but there’s still plenty of new figures to review! Marvel Legends Silver Samurai from the X-Men Vintage Series is readily available online despite being a top request of collectors for years—but is any part of that the figure’s fault…? 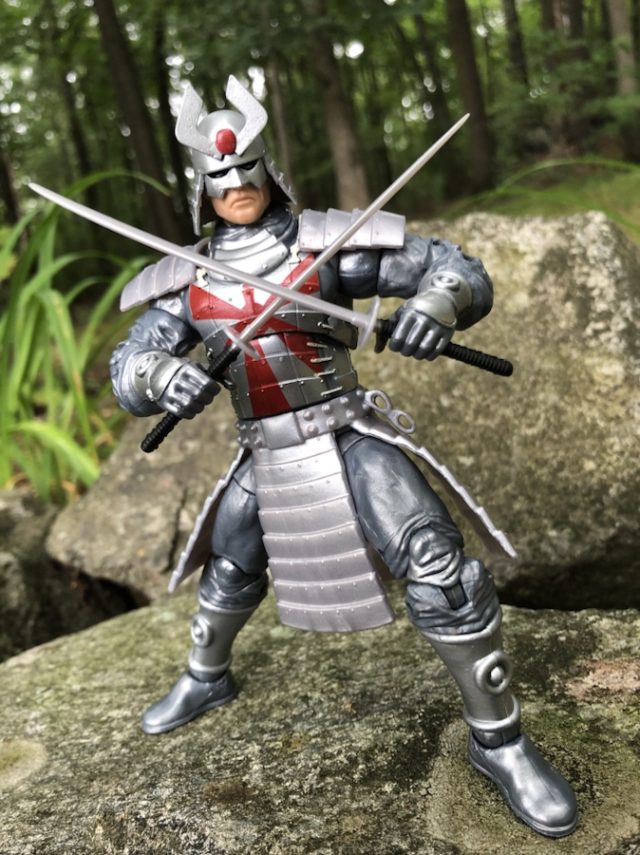 As a kid, I really dug my Toybiz Silver Samurai action figure. No, not because I had ever read any memorable comics with the character (I hadn’t at that time), and not because he appeared in a great episode of the 1992 X-Men cartoon (I thought that episode kinda sucked, actually). No, not even because the toy itself was really articulated and fun to pose and play with (because it was not all that articulated).

No, the true secret to my undying love was: the vacuum metallized chrome playing on the toy. I’ve been a sucker for vac-metallized toys ever since having Superpowers Cyborg, C-3PO and the whole Silverhawks line as a youngin’, and so I was pretty biased in my predilection for the Silver Samurai Toybiz figure. 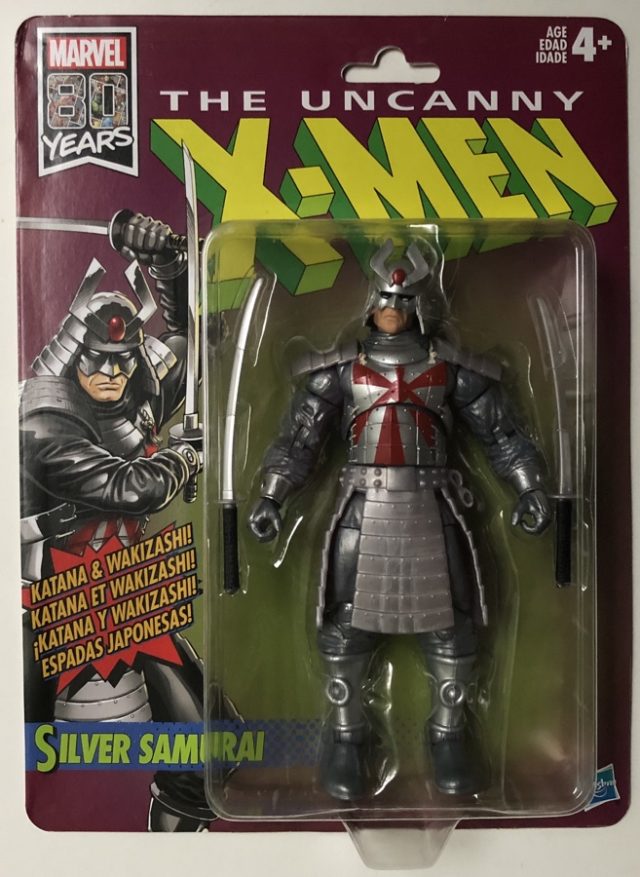 20-something years later, Hasbro has a super-articulated Vintage X-Men Silver Samurai Marvel Legends figure that’s pulling at my heart-strings with its Toybiz-styled retro packaging. Can this figure exceed my high bar for toys of the character…? 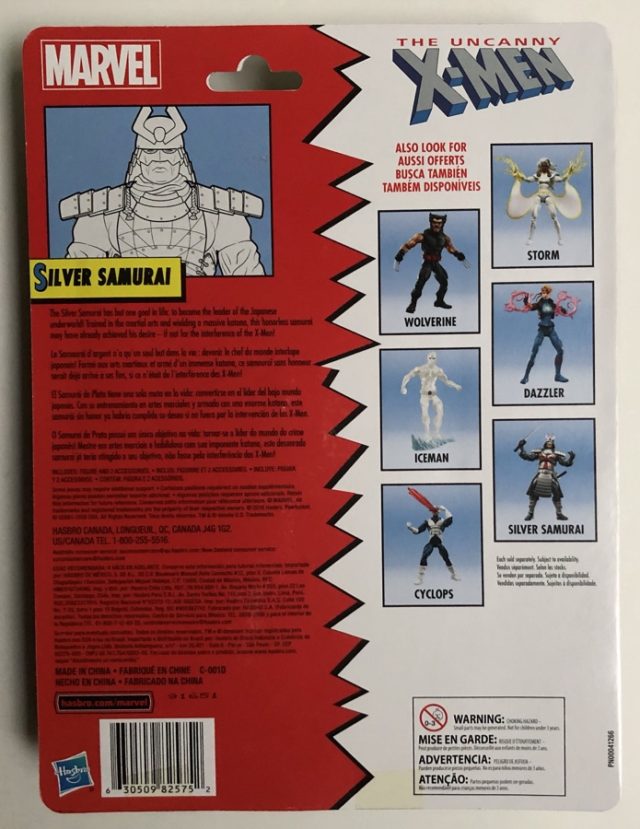 Well, as hard as it is to compare a vintage toy seen through nostalgia-colored glasses to an advanced, modern action figure, it’s not exactly hard to see that this 2019 X-Men Legends Silver Samurai soundly sliced and dices the original 1994 figure. 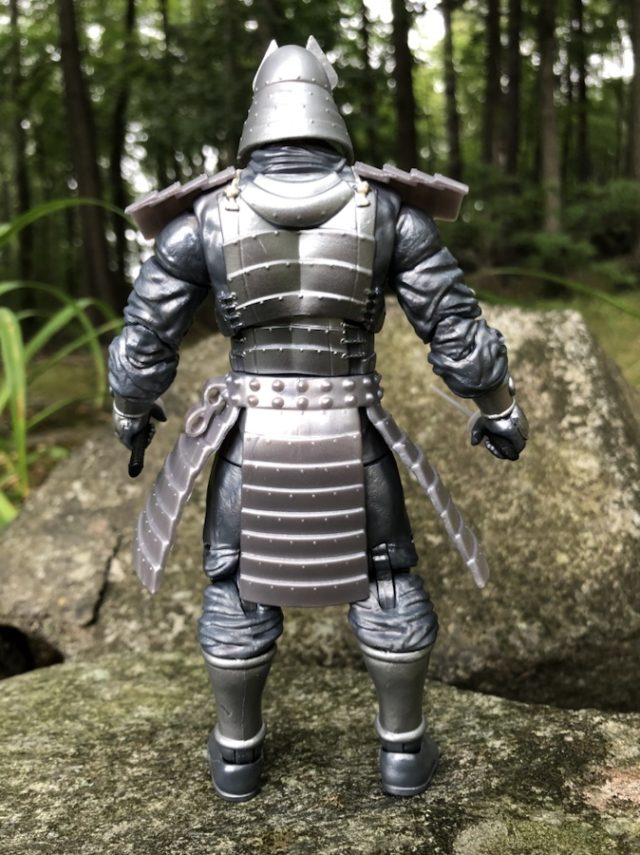 There’s exactly two potential advantages that the Toybiz Silver Samurai (shown below) has over the Hasbro iteration: a removable “helmet” and the vac-metallized costume. Chrome figures have fallen out of fashion in the modern era due to a variety of factors, so nothing can be done about that (and as I’ll discuss in a bit, using normal paint instead has some big pros). 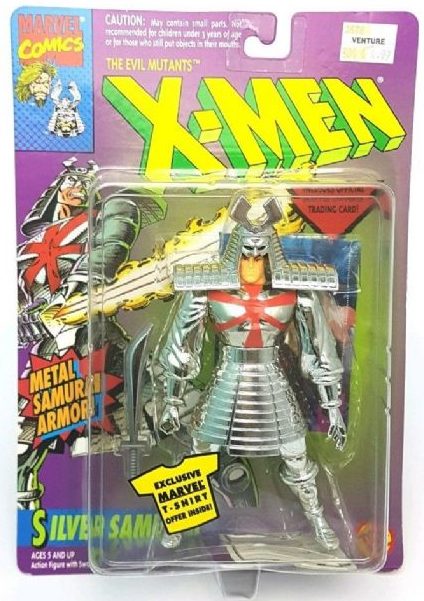 The removable helmet, on the other hand, I really do miss. Who was gonna display this figure helmetless…? Not many. But still—it’s nice to have the option, and it feels like a bit of a step back for the new figure to lack a feature the original had 25 years ago. 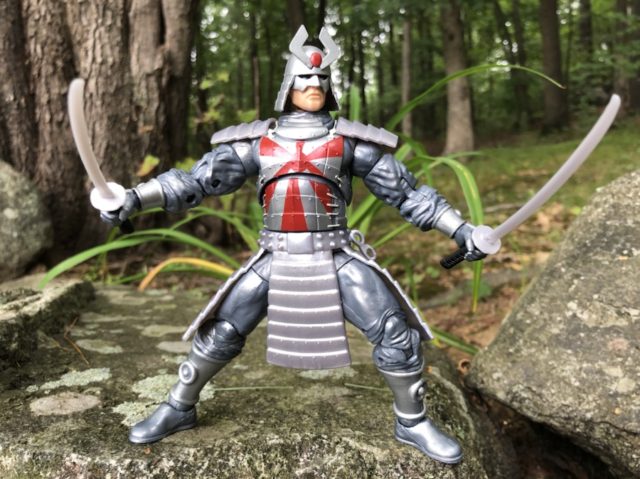 Otherwise, this figure is a major winner. The proportions for X-Men Legends Silver Samurai are fantastic, with his body actually being a suitably bulky size to reflect the fact that this is a dude in armor and not just a dude in a superhero costume. We’ve gotten too many Iron Man figures that look too thin to have a human inside, so I’m really pleased with how Silver Samurai looks. 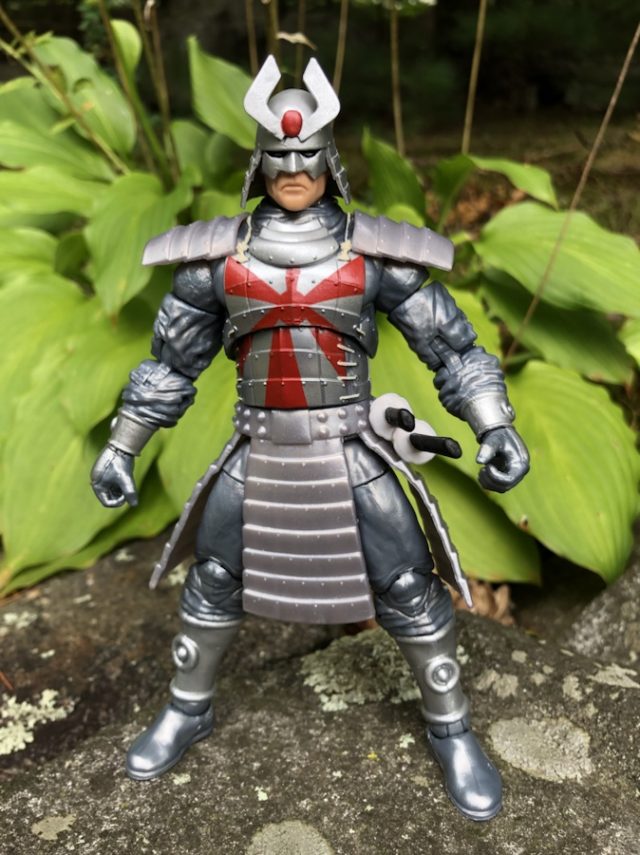 Rather than having to settle for one sword like the vintage version, this time out Silver Samurai is wielding two. They’re nothing special, but they each have a painted hilt and the cardback tells me they’re a “wakizashi” and a katana. There’s also two loops on the left side of Samurai’s waist that can hold each or both snugly. 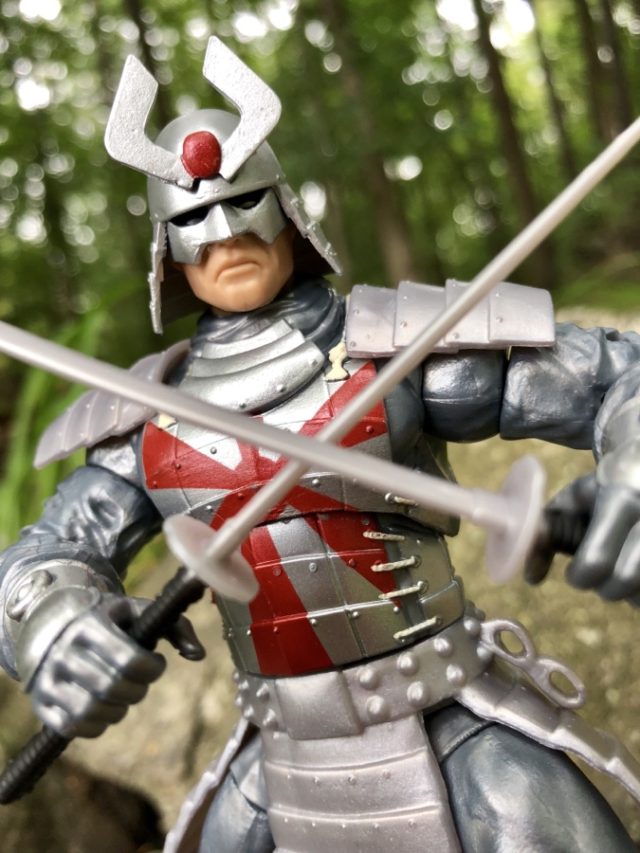 And let’s face it, Keniuchio Harada is not the most charismatic dude around. The facial expression on this action figure is a stalwart frown—and that’s just fine. It’s serious and totally befitting of the attitude of the man under the helmet. 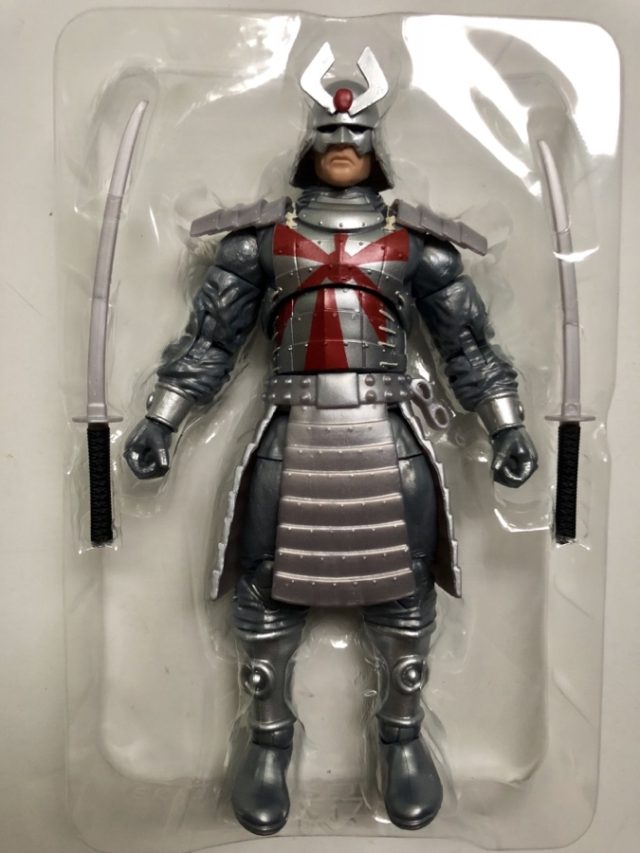 Remember when I said there were positive aspects to this toy not being chromed? Let’s talk about that now. There’s three main pluses to this being a regular ol’ painted action figure. First up, the chrome isn’t eventually going to flake off like that of so many toys of yesteryear—this Silver Samurai Legends figure will always look the way it does today. 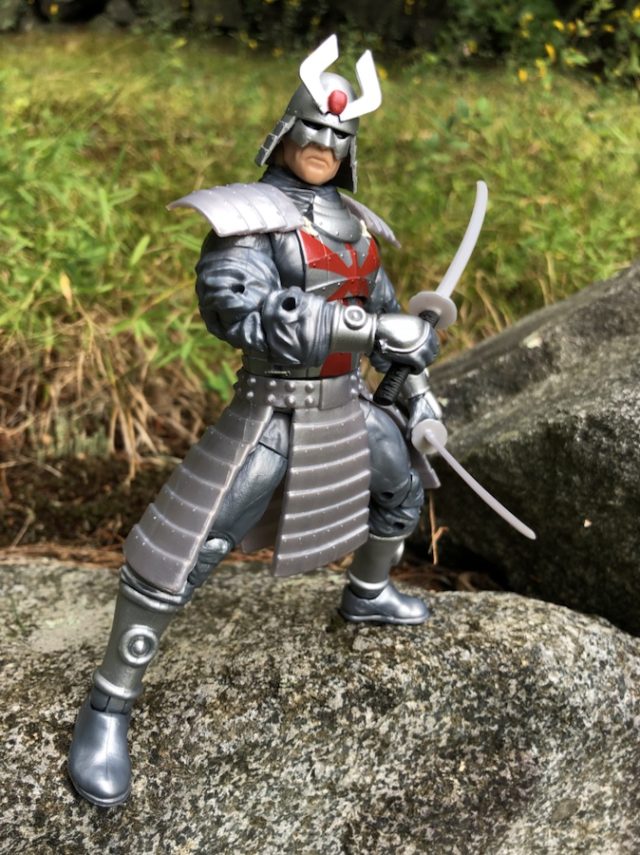 Second, the fact that there’s no vac-metallizing means that we can get a greater variance in colors on the armor—the heavy plates on the outside of the figure are a much more silver color, while his armored undersuit is a darker grey. The different colors on the armor look nice (and the red design really pops), even though I originally thought I’d prefer the silver armor all be one color like the Toybiz figure. 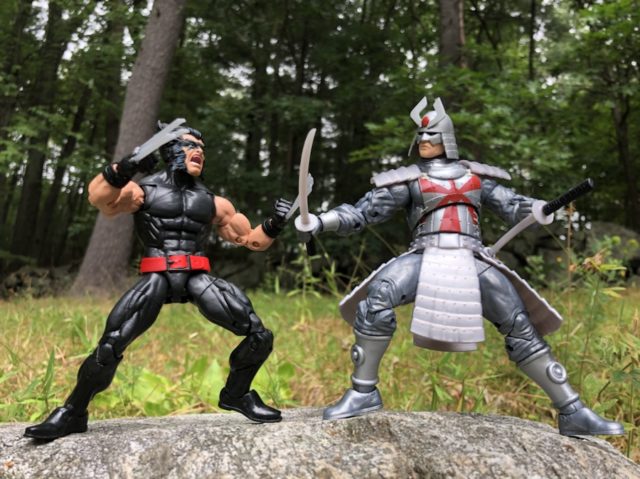 Finally, not chroming this figure means that unlike the 1994 Silver Samurai that was stiff as a board, Hasbro can actually super-articulate this one out the wazoo. The armor still gets in the way of some of the poseability (the head in particular can’t look upwards or downwards well), but here’s what we’ve got to work with:

I think butterfly swivel shoulders would have greatly enhanced this figure’s display potential as a swordfighter, enabling two-handed sword-wielding and other dynamic poses, but I’m otherwise satisfied with what Hasbro has given us in what’s a monumental articulation upgrade over the 25-year old edition of this character. 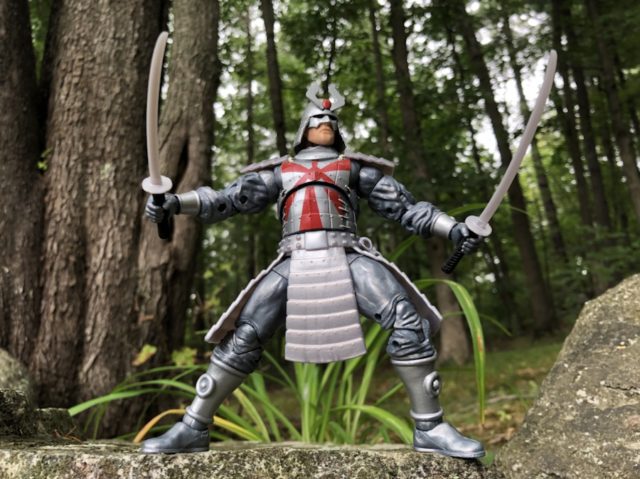 Overall: While I’m sad this figure isn’t covered in beautiful, shiny chrome, there’s no denying this figure is superior to the Toybiz X-Men toy in almost every way (with the one exception being the lack of a removable helmet on this new one). With two swords, an appropriately bulky armored look, a solid articulation scheme and plenty of new tooling, this should fully satisfy the cravings of the collector community for a 6” Silver Samurai action figure. Good stuff.

Proposed Legislation in Several States to Eliminate LGBTQ+, “Obscene” Books: Book Censorship News, January 20, 2023
4 practical steps for using no-code to evolve your prototype to an MVP
Scientists Have a Plan to Turn Earth Into a Giant Observatory
‘Run Rabbit Run’ Sundance Review – Aussie Horror Drama Is ‘The Babadook’-Lite
HBO’s ‘The Last of Us’ gets a second season following successful debut