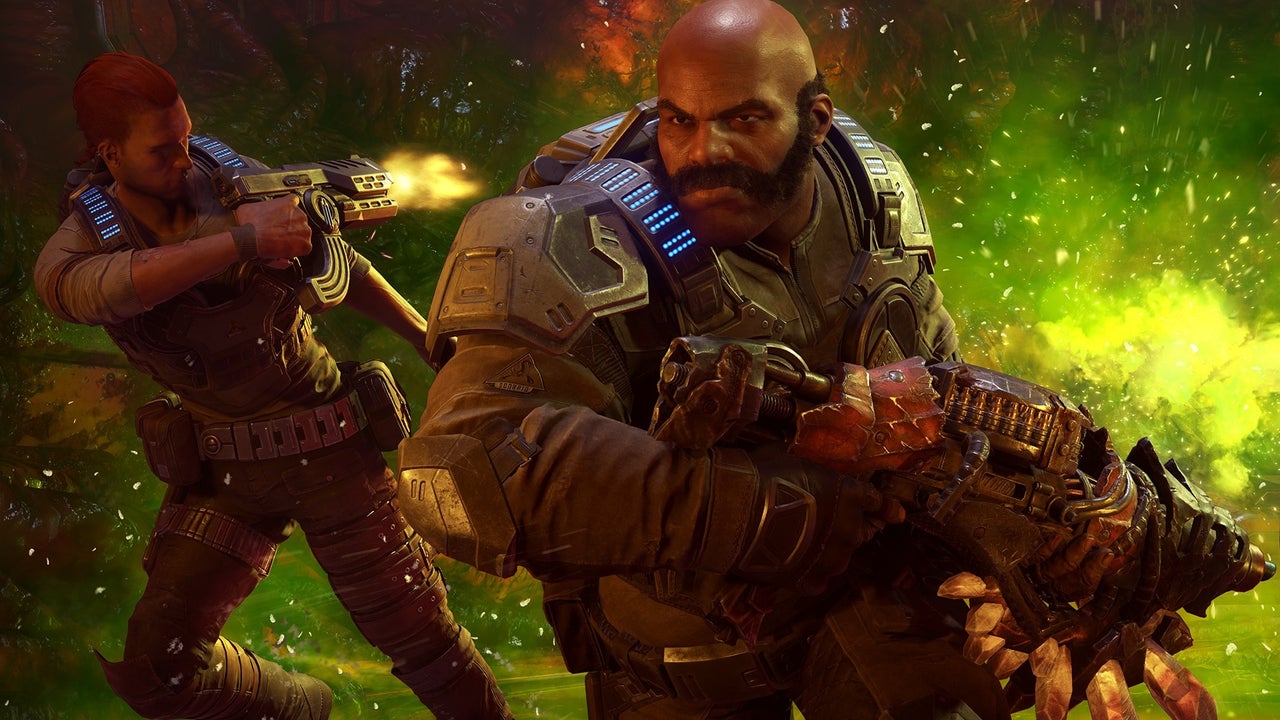 Regardless of whether you choose to play a PVE or PVP mode, gunplay is precise and pairs beautifully with the chunky running and smooth sliding of the core cover movement. Some weapons, like the Hammerburst and new Talon pistol, feel like they’re on the lower end of the impact scale, but most options generally seem well-tuned and balanced in the standard Gears fashion. This means shotguns – particularly the Gnasher – will always have a chance for a one-shot kill when you’re up close, and I wouldn’t have it any other way. Add that weaponry to excellent cover mechanics (the characters are all tumbling masters) and we’ve got a solid foundation for a great cover-based shooter. The sound design is particularly good too; the footsteps of COG and Swarm are easily identifiable, and sounds that signal certain map events are great for revealing enemy positions.

Missed our review of Gears 5’s campaign? Watch it above or read it here!

While the parade of opening weekend was rained on by the typical range of technical woes, just a few days later nearly everything seems to be in working order and Gears 5’s Versus modes are as enjoyable as they’ve always been – and more so, in certain cases. Rolling from cover to cover and welcoming foes with a quick one-hit Gnasher kill to the face is great in any Classic or Ranked mode. One small catch is that as much as I enjoy playing Team Deathmatch, it’s a little annoying how often this one mode comes up in the Classic Quickplay rotation. There isn’t a lobby for the other objective-based modes like Dodgeball, Guardian, or Escalation. Since those and others are just lumped together and randomly put up to a vote, it’s been hard for me to put as much time into each of them as I’d have liked. It’d be nice to see them broken out from a TDM lobby like a few are in Ranked.

Arcade is the standout of Gears 5’s iteration of Versus.

Arcade is the standout of Gears 5’s iteration of Versus. This new mode is a more casual and chaotic game type that welcomes those who feel they’re always the Gnashed, never the Gnasher, with open arms. Instead of starting everybody with the standard Lancer/Gnasher loadout, you’re given an arsenal based on your character, which can be changed at any point between deaths during the match. Don’t expect to see premium weapons littered on the map with a timer attached to them, either; instead, you buy special weapons and equipment like a Markza MK1 (my weapon of choice) or incendiary grenades with skulls earned by downing and killing enemies. You’re even rewarded with a skull if you die a lot, which can help prevent the feeling of being stuck in a dead-end loop. Your skulls persist through deaths too, giving people who don’t necessarily excel at getting consecutive kills a chance to get a fun piece of equipment. There’s also a lobby for co-op versus against bots, so if you’re bringing a new friend into Gears there’s a place for them to learn how to ease into competitive play instead of just tossing them into the meat grinder.

It’s not just for novices, though: as an experienced Gears player I adore the weapons in Gears 5 but often have a hard time choosing what to hold onto in the campaign, so Arcade is a fun way to get some extra time with some of my favorites. Its change of pace from the standard Versus modes is delightful, too, because it’s more focused on having fun with the loadout of your liking and less about your expertise with Gnashers and wall bouncing. You can still use those, but you don’t have to.

Every IGN Gears of War Review Ever

The seven maps for Versus and Horde are designed well, especially for Versus. There’s a great mix of the expected arena-style maps of varying sizes. While a lot of popular shooters come with the worry of spawn camping, Gears has really never had that issue and still doesn’t. These new maps also have great designs that allow for easy flanking of key spots where certain players like to camp.

I’ve long appreciated how Gears of War multiplayer maps typically take place in some environment that further defines Sera, whether it be in a Thrashball stadium in Gears of War 3 or in a diner in Gears of War 4. Gears 5 launched with a few maps like this too. For example, Exhibit is set in a beautiful COG museum that comes complete with a destroyed gift shop and narrow hallways that provide tense spots for Gnasher fights.

The seven maps for Versus and Horde are designed well, with a great mix of arena-style maps of varying sizes.

The new maps are also mixed up by neat “dynamic map elements,” which add an extra way to obliterate enemies or to pick out which players are more likely to be careless prey. These can be things like a storm on the Icebound map with winds strong enough to interrupt grenade trajectories and decrease visibility. Taking from the campaign, Icebound also has certain ice pathways that can be shot to expose freezing water. Any enemies standing on that once seemingly solid pathway can walk out of the water, but they’ll take damage while they’re in it. One map even has a pair of trains that’ll crush anything in their paths. These hazards are great additions that don’t feel too unfair so long as you’re aware of where they’re at.

Horde has its fair share of added strategy too, and that mostly comes from the shift of having class cards that can be applied to any character to having actual characters with assigned roles and unique abilities aligned with their big personalities. I like how this change helps subtly develop each of the nine characters featured in Horde — a list that even includes two Halo: Reach characters and Terminator’s Sarah Connor as DLC additions.

The most exciting of the characters, though, is Jack. Your robot buddy from the campaign is a key support character in multiplayer too and is a ton of fun when facing off with your team against wave after wave of fodder. Instead of equipping weapons, Jack has a built-in laser he can use to stun and damage enemies and a repair tool that can heal allies and rebuild fortifications. Better yet, his ultimate ability allows him to assume control of an enemy unit for a limited amount of time – which is enough to do cool stuff like take control of a Bastion and have it self-destruct in the middle of a bunch of Swarm. At first glance he seems like the character you’d assign to a less experienced player, which is not a bad idea because he can hang back and lend a hand without taking as much direct fire. But in the hands of an experienced player, he can be used to pull off some really awesome strategies, especially since he automatically goes invisible after being left alone for some time. I’d use his increased mobility to flank tough enemies and to collect important weapons for my teammates.

Some maps are better built for Versus and don’t quite feel as great for Horde, though. For instance, since Exhibit is only built with two lanes and is a tighter space, it’s rather difficult to choose one good place to defend with your fabricator. This is especially true when a large boss enemy comes pouncing or charging through the map. Even still, they’re a challenge I’m willing to work on solving with my friends.

Some maps are better built for Versus and don’t quite feel as great for Horde.

My only hope is that with the next Gears, developer The Coalition will consider adding a sort of timed pause for Horde outside of custom games. When you hear a friend has had chili cooking all day and it’s finally ready when you’re almost an hour in at wave 25 of Horde, you start wondering when they’ll sabotage your team a little just to get a short break.

In lieu of that we get Escape mode, the newest major co-op mode in the Gears franchise and one where time isn’t as much of an issue. Instead of defending yourself through 50 waves like in Horde, you have to get out of a dangerous Swarm hive that’s slowly being filled with venom, and your resources are limited. It’s great to have essentially an inverse of Horde in Gears 5 for when I still want that sort of strategic challenge but don’t want to dedicate hours to one or two runs. Escape also features its own story hinted at through in-game banter (Left 4 Dead style) between its three completely new characters. Each member of the team has a passive and active ability. For instance, Lahni has a passive chance to get extra pickups when executing enemies and she has an active ability to use an electroblade to chain stun enemies and deal a bunch of damage. Composing a strategy between your team of three is crucial for success at the harder difficulties. There’s less ammo, more enemy damage, and other changes to make up to seven total challenges or “modifiers.” If you don’t have someone producing ammo in some way, you’re going to have a tough time surviving. Figuring out this strategy is easy now since there’s only six characters if you have the three brought in from DLC, but based on The Coalition’s post-release plan, we’ll have more to choose from later.

Escape is also unique in that it doesn’t reuse the multiplayer maps, but instead has its own map that cycles out with a new one from The Coalition periodically. This means that it can constantly present unique and unpredictable challenges, and there are even leaderboard rewards to go with it. With that randomness comes some rough patches: I did find that some runs were made more difficult because of the kinds of enemies we encountered. Sometimes we didn’t get a certain weapon that would’ve helped with an overwhelming final challenge I knew was coming. For instance, being stuck with a Talon and an Enforcer (two close-range weapons) made any room that required range so much harder than it needed to be. But scrambling to solve those issues by sharing weapons or flanking enemies is part of the challenge of Escape, and restarting a run is always an option. I’m looking forward to seeing how this mode changes over time – and playing user-created maps. I’m still working on creating my own mess of a map.