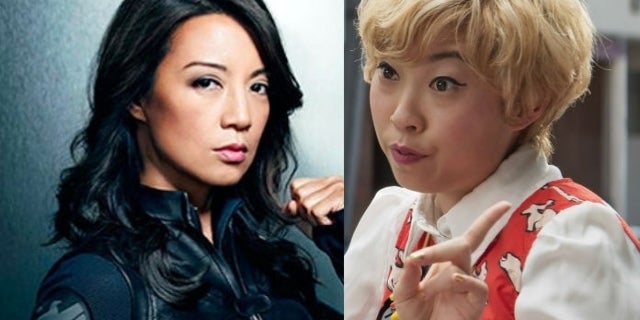 Awkwafina has some big projects ahead of her! The actor known for films such as Ocean’s Eight and Crazy Rich Asians will be making her Marvel debut in Shang-Chi and the Legend of the Ten Rings in 2021, but first she’ll be seen in Jumanji: The Next Level in December. She’s also rumored to be Scuttle in Disney’s upcoming live-action remake of The Little Mermaid, and will soon be starring in her own Comedy Central series, Nora From Queens. According to TV Line, Awkwafina‘s show just cast another Marvel actor, Ming-Na Wen, who plays Agent Melinda May on Agents of SHIELD. According to the report, Wen will be guest-starring on the series as Awkwafina’s aunt.

Wen’s character is described as “bohemian, earthy and spiritual aunt who comes for a visit.” Wen recently retweeted the article in celebration of the news.

Wen isn’t the only Marvel star expected to appear on Nora From Queens. A recent post shared by Simu Liu, who was recently cast as Shang-Chi, hints that he could be making an appearance on the comedy show.

In addition to appearing on Nora From Queens, it was also recently announced that Wen was cast in Star Wars: The Mandalorian, the first big show coming to Disney+ in November. Recently, Wen shared she was a “bit hesitant” to join the show. In fact, she recently revealed it’s her most challenging role yet.

“Every role that comes along, there’s always a challenge to it, but I would have to say Mandalorian. Because, having had this dream of wanting to be in the Star Wars world, and then finally getting the part, I wanted her to be — yeah, I’m playing a woman, I gave that away! I can’t believe I gave that away,” Wen said, laughing. “I’m gonna be arrested and put in some Disney dungeon. They’re gonna take away my Legends title [laughs]. So I think that one, I put so much thought and process into creating her. Everything from the way her hair would be, so that was a really important one for me. I hope you guys like her.”

The Mandalorian premieres on Disney+ on November 12, and Nora From Queens is expected to premiere in January 2020. Agents of SHIELD returns for its seventh and final season next summer, and Shang-Chi and the Legend of the Ten Rings will hit theaters on February 12, 2021.