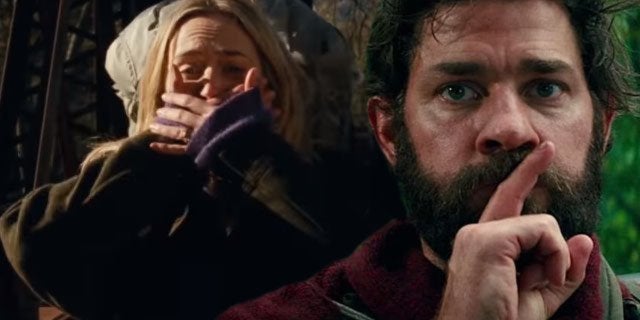 Last year, the innovative horror film A Quiet Place took the box office by surprise and by storm, scaring up over $340 million and helping cement director John Krasinski as a major force in Hollywood. And with success comes the inevitable sequels, and now the director will reunite with his wife Emily Blunt for a sequel to A Quiet Place. But while these returning faces will help chart the next adventure in a world plagued by sound-hunting monsters, it looks like the film’s original writers are moving onto their next project.

During an interview with ComicBook’s Patrick Cavanaugh, writers Scott Beck and Bryan Woods explained why they aren’t writing the sequel, leaving that job to Krasinski.

“As creators of essentially the movie and the franchise, we always have our hand in the mix,” said Beck. “But what was really funny about opening weekend last year is, it was almost immediate that the studio announced there’d be a sequel. What our reaction was, and what John’s reaction was, like, ‘I don’t know if it needs a sequel.’

“We always envisioned it collectively as a standalone film, and very much like what Bryan and I were trying to mount on the wake of A Quiet Place is actually what we consider learning the right lesson, is that there actually is space for original ideas on a big theatrical level. So the decision that Bryan and I made was we’ll be passively involved in it. And what was great was John ended up cracking an idea that he really loved and he took the ball and ran with it.”

Beck added that they’re focusing on creating the next big thing, but that they’ll always be involved to some degree because they created the concept and launched the budding franchise.

Krasinski took some convincing to return for A Quiet Place 2, but as the writers stated he got an idea for a unique approach to continue the story. He spoke with Collider about how the new movie will explore the world established in the first film.

“Why I had this little idea that’s now gotten bigger is most sequels are about a villain returning or a hero returning, and you have to build this entire world around just the idea that I have a hero or a villain,” Krasinski told Collider. “That’s a lot, and I think that’s where a lot of sequels go wrong because as much as you love that hero or villain, the entire thing is fabricated just to make that person work. [With A Quiet Place 2], we have the world.

“So it’s actually the world that’s built, it’s the idea that the rest of the world is going through this exact same experience. Are there other people that have to survive like this? It’s that idea of living through the set of circumstances, not again in the same way obviously, but exploring it more. You only got to do it intimately for a small amount of time, so what happens next?”